A Grade I Listed Building in Gwernyfed, Powys 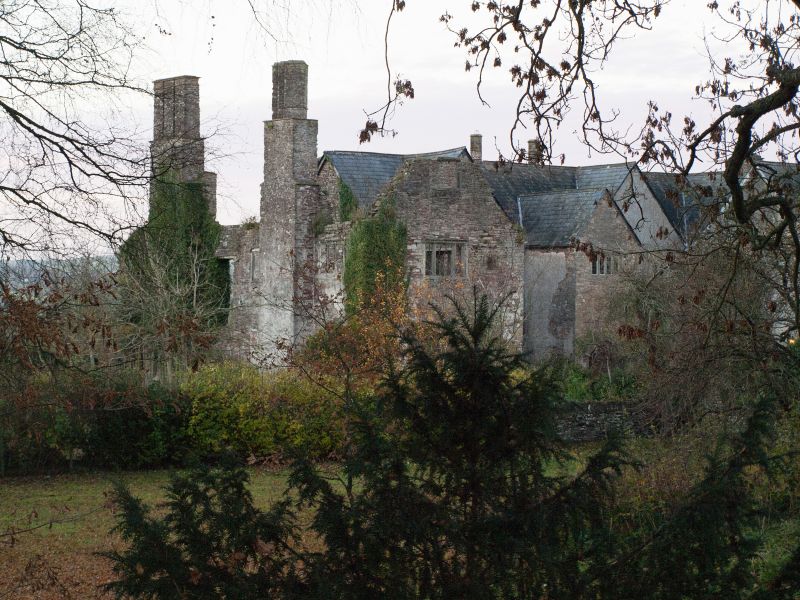 Location: Located on NW side of road from Talgarth to Felindre, and set within its own grounds at the end of an axial driveway from the entrance gates on the road. The former farm buildings lie immediately to

Old Gwernyfed is the major gentry house of the area. It is of medieval origins, claimed to be gifted by Bernard Neyfmarché to Sir Peter Gunter. It was the seat of Gryffydd Gunter Vychan in the early C16, and came into the hands of the Williams family c1580. It was extensively rebuilt in the early years of the C17, probably by Sir David Williams [Dafydd ap Gwilym] of Ystradfellte, Gwent, Judge at the Court of Queen's Bench and the MP for Brecon, before his death in 1613, when Sir Henry (Harry) Williams, knighted in 1604 and also MP, took residence. He later became the first High Sheriff for the county. Charles I stayed with the Williams' at the house on his flight from Brecon to Old Radnor on the night of August 6th 1645, and is said to have left the cryptic message on the hall screen for Prince Rupert. In the later C17 Sir Thomas Williams was the private physician to Charles II. It was probably during the remodelling of the earlier house in the first decade of the C17 that the remarkable remnant formal gardens were laid out on the cross axis behind the house, and the earlier fishponds to the SW were incorporated. The Williams family removed the family seat to Llangoed Hall, near Llyswen in c1730, and in c1780 the SW wing was gutted by fire and remains a shell today. The house is of the classic later medieval-transitional plan with cross passage, low hall to the left, with the parlours in the SW cross wing, and service room with a lateral fireplace, balancing the hall, to the right of the cross passage, and service wing beyond the stairway. The reused medieval porch is said variously to have come from Llanthony or Brecon priories, or more locally from Aberllynfi or Felindre churches. Folklore believes it to be the bringer of ill-luck.

'E'-plan house, built of rubble sandstone, partly rendered, with a slate roof. Two storeys with attics throughout, symmetrical, with a 2-storey gabled projecting central porch, wide gables either sides, and on the inward facing sides of the forward wings. Both wings are also gabled to the front and have large external lateral stacks with diagonally placed brick flues. The entrance porch arch is of the early C13, comprising nook shafts with shaft rings and scalloped capitals, and a quarter-round inner order. The arch appears to be reset to give a more depressed 2-centred arch, the outer order a continuous bowtell stopping before the springing, and chamfered hood mould rising from chamfered impost blocks. Within the porch, side seats and flagged floor, and ogee-moulded Tudor arched inner doorway, the moulding stops enlivened with potted plants. Studded 4-plank panelled oak door with vertical cover strips, containing a wicket door. Joisted and plastered ceiling.

On either side of the porch, 3- and 4-light mullioned stone windows with labels to ground and first floors, and similar windows in the large gables, now blocked. All windows have hollow chamfered mullions and surrounds and relieving arches. To the right bay, an early C18 rusticated doorcase provides a secondary access. The wings also have stone mullioned windows with labels, both wings having large external lateral fireplaces carrying 3 flues; set diagonally on the front stack, square on the rear. On the right wing, a C16 door with carved spandrels, the mouldings stopped as on the front door, and narrow cellar under. Rear has 3 gables, and variously placed 2-, 3- and 5-light mullioned windows, the stack to the service room removed, and the rear (NW) wall of the parlour wing demolished.

Cross passage, which may not have had an early rear door, has a timber screen to the hall, comprising fluted wood columns with capitals having a cavetto and egg and dart top member forming 5 bays, the centre bay probably the original opening to the hall, now replaced by a fielded-panelled door at the rear end. The capitals have a cryptic inscription, interpreted as "Beware to whom thou does disclose - the secret of the wooden poles. In future wiser then before, according to their kind ignore". The 'poles' are now infilled between with C17 panelling, reeded at the top. The columns, within the great hall, carry a deep moulded cornice, square panelling and an open gallery of twisted balusters, with a moulded cornice. The hall has a large stone fireplace on the rear wall, panelling brought from the first floor chamber, and a thin-ribbed geometrical plaster ceiling with leaves, which has been lost over the SW two-thirds of the room. The SW end wall, erected after 1780, cuts across a doorway on the rear elevation. The room to the right of the cross passage has C17 panelling around the fireplace, ex-situ. The rear room of the NE service wing contains the kitchen, with a large fireplace with a wide 3-centred voussoir arch. A narrow spiral stair in the end passage against the service wing now provides access to the first floor. Chamber over the porch has a shaped doorhead and square dome ceiling, and further panelling in 'Fairfax' bedroom. The chamber above the original kitchen, now the dining room, has a bolection moulded fireplace and date of 1680, now not visible.

The great chamber over the hall, now the bedroom 'Tudor', has some surviving wallpainting of the C17 - an interlacing trail with rosettes at the junctions, and fragments of a moulded plaster ceiling. The roof over the hall range comprises 8 bays, the end bay shortened with the rebuilding of c1780. The trusses are of late medieval, probably C15, date, three at the parlour end originally smoke blackened, with trefoil cusping above the missing collar, cusping and mortices with 11 pegs for elaborate carpentry below. They are numbered I - VII from the service wing. The principal rafters, of approx 35cm scantling are butted at the apex, and are slightly cranked at low level, and are trenched for 2 tiers of purlins. Windbraces, probably also cusped, extended above and below the purlins for the four bays over the hall at the SW end. The decorative carpentry was removed, probably either during the early C17 conversion or later, to provide attic accommodation - 2 stone chamfered fireplaces survive. Service wing has similar trusses, but are tenoned and pegged at the apex and carry 3 tiers of purlins.

Included at Grade I as an exceptional C17 house retaining important interior features and surviving evidence of the preceeding medieval house; described by Haslam as 'one of Breconshire's best set pieces'.