A Grade I Listed Building in The Vale of Grwyney (Cwm Grwyne), Powys 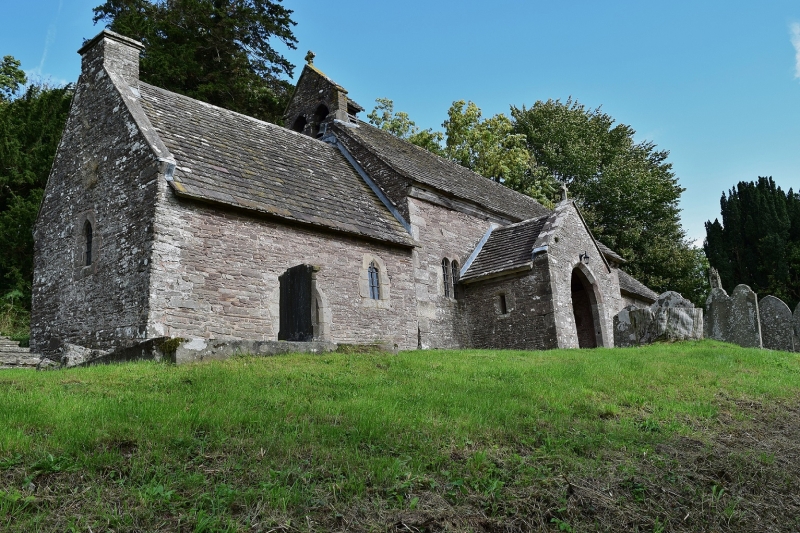 Community: The Vale of Grwyney

A church was consecrated here c1060, of which the partially rebuilt chapel of the present church may have been part. The remainder of the fabric is C14 and C15, to which a rood screen was added c1500. The whole church was well restored by W D Caröe 1908-9.

Simple Gothic church comprising nave and chancel, with S porch and W chapel (Eglwys y Bedd). Of random rubble walls with bigger quoins, battered at the base, and stone tile roofs. The chapel roof has a steep pitch and was rebuilt early C20 slightly lower than previously, the earlier pitch marked by drip stones in the nave W wall. The nave has a wooden cornice below the eaves. The S porch is on the W side of the nave and has a coped gable with a cross on the ridge. The S doorway has a 2-centred head with a continuous chamfer and broach stops. In each side wall is a small chamfered, flat-headed opening. L of porch is an early C20 2-light window with round-headed lights. To R of porch is a continuous stone bench (facing a preaching cross) and a 3-light Tudor window with hood mould. To upper R is a rood loft light in a dressed surround. The chancel is narrower and has a stone seat against the S wall similar to the nave, but broken by a priest's doorway R of centre with renewed boarded door and strap hinges. Flanking the doorway are small windows in dressed surrounds. The E window is 2-light with hood mould, L of which is an early C19 memorial tablet. On the N side the chancel and nave have substantial traces of limewash, but no fenestration. The nave has a shallow outshut housing the rood stair added c1500. In the nave W wall the chapel is lower and offset to S side. To upper L in nave W wall is a square-headed window with iron barring. A W bellcote has a coped gable with cross on the apex, and 2 bells in openings with segmental heads.

The chapel, or Eglwys y Bedd, has a C14 doorway offset to L in the S wall with 2-centre head, continuous chamfer and renewed boarded and ribbed door. To R is a trefoiled lancet. Plain lancet to W wall, the gable of which has a stone stack.

The porch has an early C20 roof. In W and E walls are bench seats, with small C15 stoup. The S doorway has a Tudor head and a boarded and ribbed door with strap hinges and studs. The nave has a ceiled wagon roof with embossed ribs and a moulded cornice. In the N wall of the nave is a doorway with Tudor head to the rood loft. The chancel arch (obscured by the later rood screen) has polygonal responds of early C15, moulded capitals and a 2-centre arch with 2 orders of chamfers. The chancel has a ribbed ceiling with billeted cornice and tie beams, by Caröe.

The church has a variety of internal fittings and fixtures over a long time span which demonstrate radical changes in liturgy. To R and L in front of the chancel arch are pre-Reformation stone altars with consecration crosses. Above the altars is the fine rood screen of c1500, partly restored 1908-9, which is of Welsh Marches style and dominates the interior. It is later than the stone altars which it is built over, which accounts for the screen's plain panelled dado. The central doorway has a pierced shallow triangular head (the doors are missing) flanked by 5 lights with pierced tracery, the outer lights wider above the altars. The (much renewed) coving is ribbed and embossed. The bressumer has 3 tiers of foliage trails, the upper a vine trail with wyverns at the ends biting the leaves. The loft has a balustrade consisting of panelled muntins and panels pierced with delicate Perpendicular tracery, above which is a cornice of flattened quatrefoils and brattishing.

The walls are plastered and have paintings and texts of both pre and post Reformation periods. In nave W wall is a pre-Reformation memento mori comprising a skeleton holding aloft an hourglass, spade and knife, in red ochre. In the nave N wall is a large C17 Royal Arms now mostly perished, to R of which is a contemporary Creed. In the S wall is a 10 Commandments, also C17. Above the S doorway is another illegible image. Further small texts and fragments are on the N and S walls.

The font is c1055 and consists of a round bowl on a later pedestal. The bowl has a roll moulding around the rim terminating in leaves, and around the top of the bowl is an inscription MENHIR ME FECIT I[N] TE [M] PORE GENILLIN ("made in the time of Cynhillin", lord of Ystrad Yw mid C11). A C17 polygonal pulpit has plain panelling. In the chancel are altar rails as prescribed by Archbishop Laud in the 1630s, with fret-cut balusters. Several C18 memorial tablets, many the work of the Brute family.

The W chapel has a separate entrance. The arched-brace roof is restored. At the E end is a pre-Reformation stone altar offset to R, to L of which is a niche with cinquefoil head and 2 steps leading to it, now empty but designed for an image. A flat-headed opening in a dressed surround above the altar has iron bars and modern glazing.

Listed Grade I, Partrishow church retains pre-Reformation and C17 features of national importance, in a church which was sensitively restored early C20.