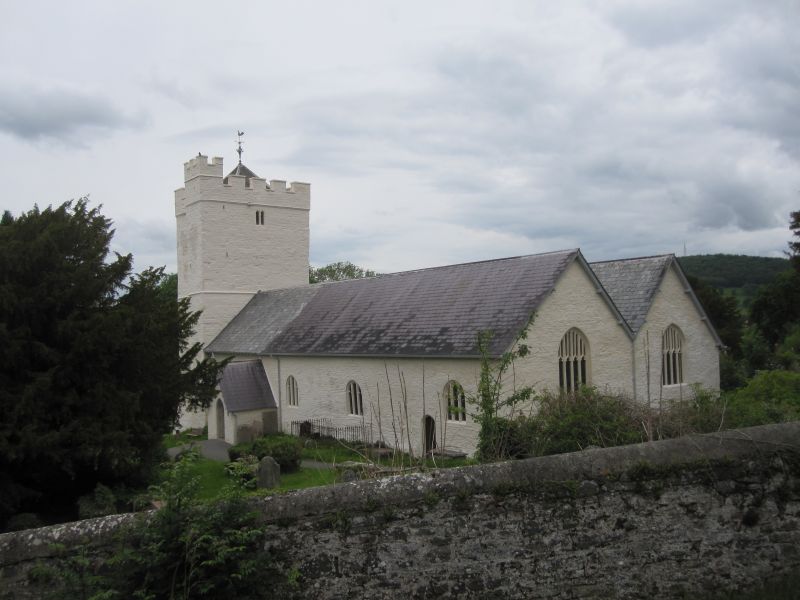 Location: Situated in large churchyard in the centre of Defynnog village.

Anglican parish church, mostly late C15 with tall tower, nave and NE chapel, and S porch. The chancel and NE chapel seem to be of one build, but there is evidence of alterations on the nave N and of a building joint between nave and chancel on S. A church is recorded in 1254 and 1291. When Sir Stephen Glynne visited the W end of the nave was partitioned with a gallery, removed when the church was restored 1888-90 for £1,793, including three replaced windows, some rebuilding of walls and new roofs. There was minor work in 1905 including work on the partitions at the W end of the nave. The incised stone now in the porch was at the SW angle of the tower, upside down. The font and stoup are of early date C12, possibly pre-Norman. The W end of the nave and the tower were used in the early C19 as a schoolroom.

Parish church, rubble stone with slate roofs. Nave with chancel under single roof and parallel-roofed NE chapel or chancel aisle, S porch and large W tower.
Tower has high sloping base with bull-nosed stringcourse over, another similar stringcourse at mid-height and a coved stringcourse above, under embattled parapet. Slated pyramid roof with wrought-iron finial and weather-cock. Big SE stair turret with similar string courses but higher battlements and no plinth. Small C15 two-light bell openings in red stone with arched lights and sunk spandrels. Rainwater spout on S and also one small light in second stage. W side has larger single-light at ground floor and smaller one under mid string course, and two rainwater spouts.
Unusual 3-light late Gothic windows with segmental pointed heads and two mullions with very slight cusping, except at nave W end, former schoolroom. Nave S side has joint to tower suggesting that tower is earlier. Flat eaves to W section, which has two earlier C19 segmental-pointed windows with cut grey stone voussoirs, wooden Y-tracery and leaded glazing. Big porch has later C19 fretted bargeboards, pointed arch with chamfered medieval long stones to jambs and medieval arch stones, but with C19 inserted jamb stones to raise arch. Inner pointed chamfered doorway and painted grained door with cover strips. Early stoup with square raised panel on three sides of canted front. Two right of porch are three three-light windows, the first one a C19 copy, the last one lighting the chancel, with a segmental-pointed chamfered priest's door to its left. Twin E gables with overhanging verges, each with 4-light Perp E window with ogee heads to lights and panel tracery. No structural joint between.
N side of nave has rebuilt right end with blocked square-headed window of possibly ancient date, tooled stone lintel far overlapping tooled stone jambs, the lintel slightly cut-into for the head. Straight joint to piece of older wall with sloping base under a C17 or C18 two-light oak window with leaded lights and timber lintel, then a three-light segmental pointed window like those on S wall. In angle to NE chapel is a hipped C19 low building of squared stone with W door and small N single light.
NE chapel has W gable overhanging at verge, similar medieval 3-light W window, and a plain later C19 pointed sandstone doorway to left. N wall has two similar 3-light windows, to centre and left, the centre one C19, the left one medieval.