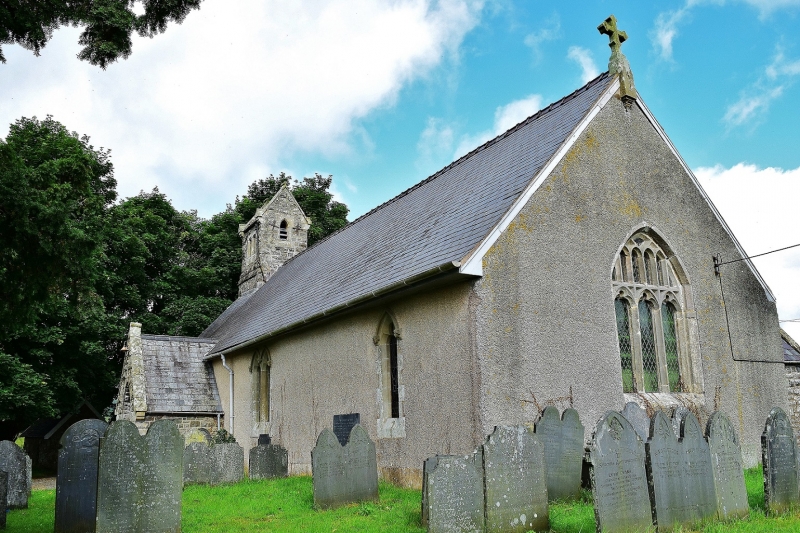 Location: In the village of Llangadfan to south of the Afon Banwy. The church stands a little east of centre in a churchyard surrounded by a wall in slatey stone; gate to west, steps down to field at south. W

A church of early origins, in a churchyard which was approximately circular until 1910; the present
structure probably originates in the C14/15, but was extensively restored in 1867-8. The dedication is
to St Cadfan, a Breton missionary of c.600. The church was noted as the capella de Llankaduan in 1254.
Rectors are recorded from 1361.

The present structure retains a C14/15 roof with wide-cusped timbers (now concealed) and a poor or late
Perpendicular east window, and a pre-Reformation water stoup. There was a timber-boarded small belfry
and dormer windows, probably on both sides, lighting a west gallery. The roof had stone tiles. Before the
restoration there was no interior structural distinction between nave and chancel.

The church was extensively restored in 1867-8, to the design of Benjamin Lay of Welshpool, under the Rev. Griffith Edwards, at which time it was given new windows to north and south, a new belfry, a north vestry and a south porch. The interior was given a new chancel arch and also a ceiling which conceals the mediaeval roof. The gallery was removed, but some of its carving was incorporated in the base of the chancel roof. The pulpit was removed to the north side. Many bones were found in the interior during restoration. The builder (until his failure) was H Williams, and the work was completed by H & H Owen. Glynne, visiting in 1869, regretted the loss of ancient features.

Many of the headstones in the churchyard are of a distinctive local carving tradition, with fine lettering
and decorative and religious motifs at the heads of many stones; many designed as double headstones. Most are in the old (pre-1910) churchyard, but some are in the later extension, as the tradition appears to have persisted down to the 1930s.

A single-cell church with no exterior differentiation between nave and chancel, in local stone, rendered
with freestone dressings; to which C19 additions of rather different character (belfry, porch and vestry by
Benjamin Lay) have been made in quasi-coursed rock-faced gritstone with freestone dressings. Slate roof
with tile ridge and cross finial at east.

The east window is two-centred Perpendicular, with three main lights and tracery lights above, retaining
much original stonework. The windows to north and south are all of the C19 restoration, single or double
lights with trefoil heads and labels with head terminals to the labels. Main entrance arch in blue bricks.
The west elevation is plain.

On the west face of the vestry is a recent slate memorial to William Jones, d.1795, poet, critic and local
historian, interred in this churchyard.

The church is entered by the south porch. In the nave to the left of the door is a mediaeval stoup corbelled
from the wall. The nave is plain with two banks of plain pews. Quarry tile floor. Barrel ceiling
(concealing the mediaeval roof). Small projecting understructure of the belfry at west, with pointed
door. On the west wall is a benefactions board (in English). C19 bowl-shaped Gothick font in grey
freestone at west.

Small chancel defined by an arch inserted in the C19 restoration and by a timber boarded ceiling
incorporating carvings of the former gallery. Pulpit (1645) at left (moved from opposite side in C19).
Hardwood altar rail on decorative iron standards.

The concealed roof is reported to be arch-braced with cusped struts and windbraces, tenoned purlins and
no ridge beam.

A church which, notwithstanding C19 restoration, retains its original mediaeval roof (now concealed).