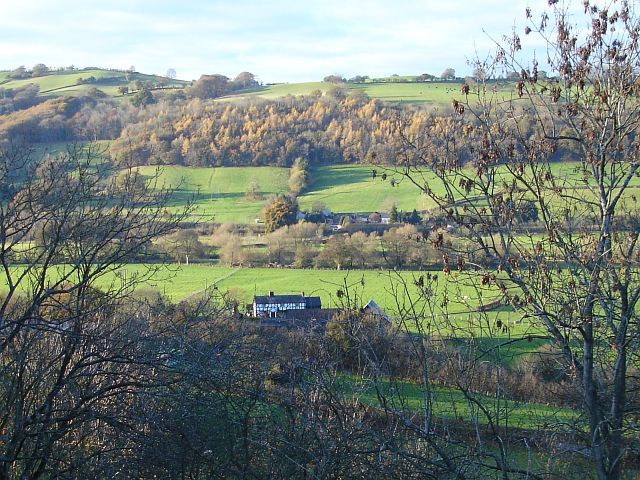 Location: Located on low lying ground on the edge of the flood plain of the River Severn. The house faces a timber clad cow-shed with a second agricultural building at right angles.

Late C17 - early C18 lobby entry house, originally of 2 units with one storey and an attic. Later (perhaps late C18), the walls were raised to 2 storeys and an additional unit was added to the NE end.

Timber framed, 2 storey, 3 bay house. Regular box framing on a masonry and brick plinth with rendered brick nogging. Slate roof and red brick stacks at NE end and opposite entrance to left of centre. The timber framing is 4 panels high, the top tier a later addition to form a second storey. The NE bay of the house (the inner room to the right) appears to have been added when the roof was raised and contains narrower panels than elsewhere. There are arched braces at the SW end and towards the centre and passing braces at either end. The front elevation is a 3 window range. The upper storey has 12-pane cast iron casements. There is a similar 16-pane casement to the kitchen at the SW end, but the other ground storey windows are C20 3-light casements with small panes. C20 timber framed porch with half lit doors. C20 pitched extension of brickwork and timber cladding to NE. The framing to the SW gable end has been rendered over, but timber planks have been attached to the render to match. There are arched and passing braces to the corners and diagonal struts in the gable apex. Small cast iron framed window to the upper storey and a C20 casement below. There is a large brick extension with catslide roof to the rear with timber framing painted in black and white. The rear elevation contains C20 windows. There is a doorway into the SW end of the catslide extension entered through a large C20 pitched porch.

Box framing is exposed in the hall and a close studded partition at the NE end could have formed the original NE end of the building. Two chamfered spine beams. The fireplace has been restored but contains possible original lintels, arched in the hall, flat and chamfered in the kitchen. The kitchen has 2 spine beams without chamfers. There were formerly front doors into the hall and kitchen, but these were removed in the 1960s and the door was restored to its historic position.

Listed as a good example of a farmhouse in the late timber framing tradition characteristic of the Severn Valley, which retains its vernacular character in constructional detail and plan form, notwithstanding the loss of some detail. Forms a group with the cow-house or stable opposite.