Mansion House including railings to street 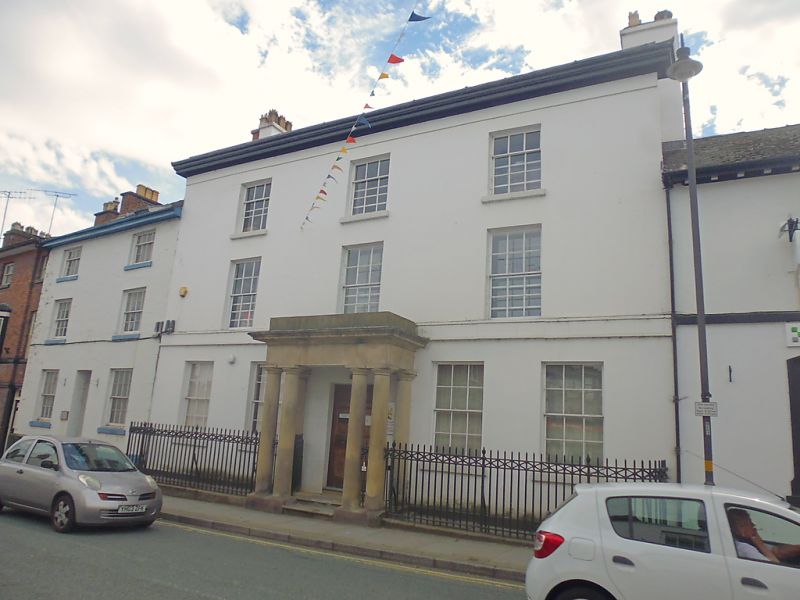 Location: A prominent building in the continuously developed S side of the street.

History: The Mansion House was built by a lawyer, Richard Griffiths-Parry, c1820, as his own residence. It remained in use as a house until c1918, when it became offices. It now houses the County Court.

Exterior: Lined-out render to main elevation which is local rubble to the rear; ashlar faced W wing with hipped roof to rear, the kitchen wing rendered, and the right-hand wing brick faced with rubble in gable end. Slate roofs with end-wall stacks. Entrance front is 3 storeyed, a broad 3-window range with central entrance. Portico porch with coupled Doric columns and engaged shafts, carrying heavy cornice and blocking course. Ground floor has 2 x12-pane sash windows to either side of the entrance. Similar 12-pane sashes to first floor, with continuous sill band; 9-pane sashes to upper storey. Moulded wood parapet cornice. To the rear, the W wing has 3 floor-length small-paned French windows to ground floor, and 12-pane sashes above. Similar 2-pane sashes to first floor of kitchen wing (its lower storey obscured by later extensions), and in right hand wing, which has horizontally sliding small-paned sashes to ground floor in return elevation to E.

Interior: Principle rooms to either side of the central entrance hall, and in the western rear wing, with principle staircase between the 2 western rooms. Kitchen, service rooms and back staircase in E rear wing. Shallow dog-leg staircase has enriched cast iron balusters, swept rail and moulded tread ends, and is top-lit by a lantern with radial glazing. Much original detailing survives, including a number of ornamented marble fire-surrounds, and enriched cast-iron grates, and moulded plaster cornices (a deep vine scroll frieze in the lower rear room, for instance). Former kitchen retains a large cast-iron range, made by Flavel and Co of Leamington.

To either side of the porch, spear head railings with lattice band and urn finials to principle posts enclose a narrow forecourt.

A high-quality early C19 town house retaining much of its original character, both in its external appearance and internal arrangement.