A Grade I Listed Building in Llansteffan, Carmarthenshire 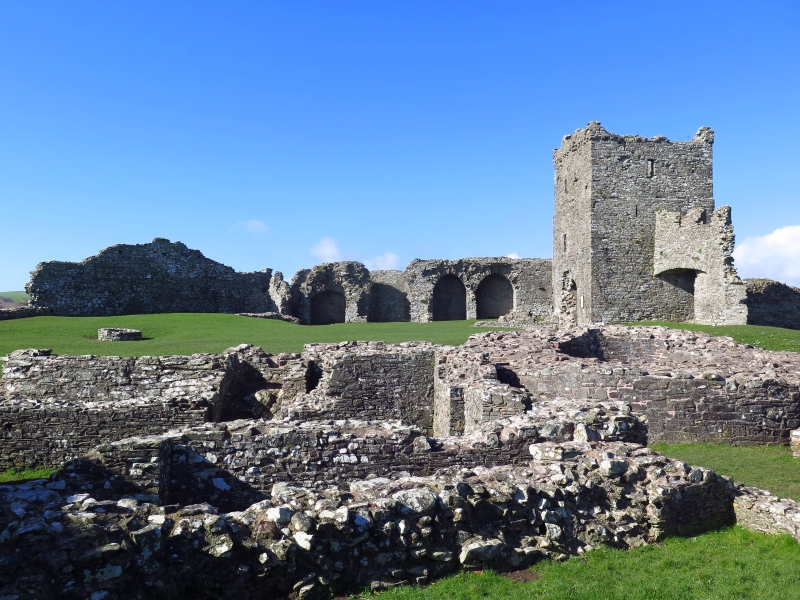 Location: Prominently situated on a rocky promontery, overlooking the mouth of the Tywi.

The castle is said to have been built c1112. In 1136, it was held by the Camville family. It was taken by Maredudd ap Gruffydd in 1146, but re-occupied by the Normans by 1158, and restored to the Camvilles. Gerallt Cymro visited in 1188. Lord Rhys took the castle the following year, but William De Camville had recaptured it by 1192. The curtain wall of the Inner Ward probably dates from Camville's refortification of the site of c1200. Recaptured by the Welsh under Llewelyn the Great in 1215, it was restored to the Camvilles yet again after 1223. The ruined Round Tower and the Inner Gate probably date from that period. The castle was briefly held by the Welsh again in 1257, but William de Camville began an extensive programme of refortification in the 1260's. At this time, the Lower Ward was enclosed in stone with two strong D-plan towers and the E bastion, and the first phase of the massive Gatehouse. After the Camville family died out in 1338, the castle passed, through marriage, to the Penres family of Gower. The castle was taken by the Welsh during the Glyndwr uprising in 1405-6. The Crown held the property during the reign of Henry VII, and it was probably at that time that the Outer Gate was made into a more comfortable residence, and the comparatively weak new gate constructed alongside it. The castle was placed in the care of the state in 1959 and is now a monument run by Cadw.

Substantial and impressive remains of a rubble masonry castle dating from the C12 to C15, consisting of a small Inner Ward, reached by a spacious Outer Ward, both with stone defences. Inner or Upper Ward largely ruined, the most significant portion remaining being the tall, square Inner Gate. This C13 building had 3 storeys, with pointed arched entrances to ground floor N and S, with portcullis grooves and bar holes still existing. Chamber above accessed via lost wall-walk, and upper floor reached from this via stair. Foundations remain of Inner Curtain and Round Tower here, which may have been removed as early as the C15. Foundations of several domestic buildings of this ward were unearthed during recent archaeological excavations. A section of curtain survives to the W, strengthened by short surviving row of vaults, perhaps in the C13, when a new wall-walk was provided.
The Outer Ward retains external curtain walls to all 3 sides. The principal building is the impressive 3-storey, C13 gatehouse, perhaps inspired by similar designs at the Inner East Gatehouse at Caerphilly. Entrance boasts a segmental arch, blocked in C15, with pair of D-plan flanking towers. Smaller arch inserted to rear, within earlier arched head, remainder blocked in stone. Evenly spaced windows with fragments of tracery. Small drum towers to angles on courtyard elevation, containing newel stairs. Attached to E is C15 entrance, with simple arched entry having single portcullis groove, 1st floor corbelled-out, with little surviving of the upper level.
D-shaped W tower in a very ruinous state. Barrel vault to ground floor, and heated upper storey chamber. E Bastion is simply a reinforcement of the SE angle, with no internal structural elements visible. Large D-pan N Tower, between E Bastion and gate, formerly for the principal apartments. Stair contained within a polygonal turret to the outer face. Internally a shell. Ground and first floor have separate entrances from the ward, with no fireplace to ground floor. First floor has fireplace, and garderobe to W. Stair leading from first floor to similar upper storey. 2 carved corbels remain, formerly supporting roof trusses. Remains of post-mediaeval barn survive between N Tower and E bastion, perhaps replacing earlier hall range.

Graded I as the substantial and impressive remains of a large medieval fortress.