A Grade I Listed Building in Aberystwyth, Ceredigion 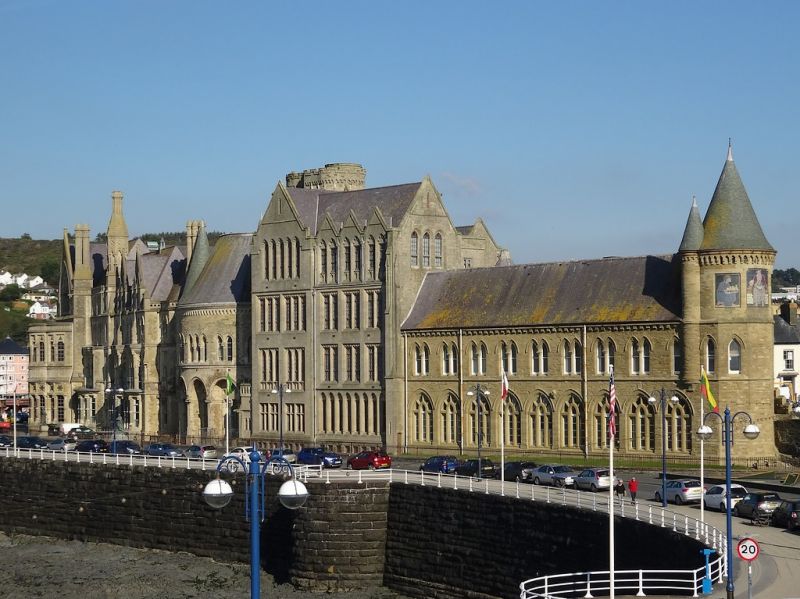 Location: Dominating the southern end of the town's seafront; railed and grassed forecourt to seaward side.

The History of the Old College starts with “Castle House”, which was built by John Nash in 1794 for Uvedale Price as a picturesque villa, enlarged by E H Martineau in 1858. In 1864 the railway entrepreneur Tomas Savin purchased it with the intention of creating a hotel of unprecedented grandeur. To create this John Pollard Seddon (1827-1906) was commissioned as architect and George Jones of Aberystwyth supervised the building, which progressed at a remarkable speed. The Castle Hotel opened in June 1865 but financial troubles soon set in and it was put up for sale. Despite having cost £80,000 it was finally sold to a committee to form the University of Wales in March 1867 for £10,000. In April Seddon was commissioned to convert the hotel into a College; opened in October 1872. In July 1885 the building was severely damaged by fire; Seddon and partner John Coates Carter (1859-1927) repaired the College with builders Messrs S Belham and Co of London. In 1893 the Quadrangle was roofed. In 1894 Nash’s villa was demolished and replaced by a new central block by C A Ferguson of London who also built the science wing in 1896. The move up to Penglais Hill began in 1970s.

Below minstrel's gallery is a bronze statue on Gothic pedestal of Thomas Edward Ellis A S by Goscombe John (1903); unsigned similar statue to other end of Rt Hon Henry Austin, Baron Aberdare, first chancellor of the University College of Wales. Main imperial staircase lies to right of the main entrance, Gothic detail, quadripartite ribbed vault and tripartite screen to top. Later broad openwell staircase to SW, staircases and Quad reached off corridor which curves around the ''0'' plan Seddon Room opposite main entrance; rounded SE side and exterior of NW side, springers suggest that it was intended to have a vault now with modern acoustic ceiling; triple arched arcade to entrance side balanced by full height windows opposite with small rose windows flanked by trefoils to tympani.

Splayed angles glazed to NW side and decoration to other side. French medieval style fireplace to either end with coned hoods, crenellated and dog tooth cornice and marble columns with fleur de lys capitals; iron canopy over grate to NE end.

Listed for exceptional architectural and historic interest. The building was never completed to JP Seddon’s designs but remains a particularly important example of that style so loved by wealthy Victorian patrons and so imaginatively created by architects of the period. Group value with other listed items in King Street, New Promenade and Laura Place.