Church of Our Lady of Mount Carmel and Attached Presbytery (RC) 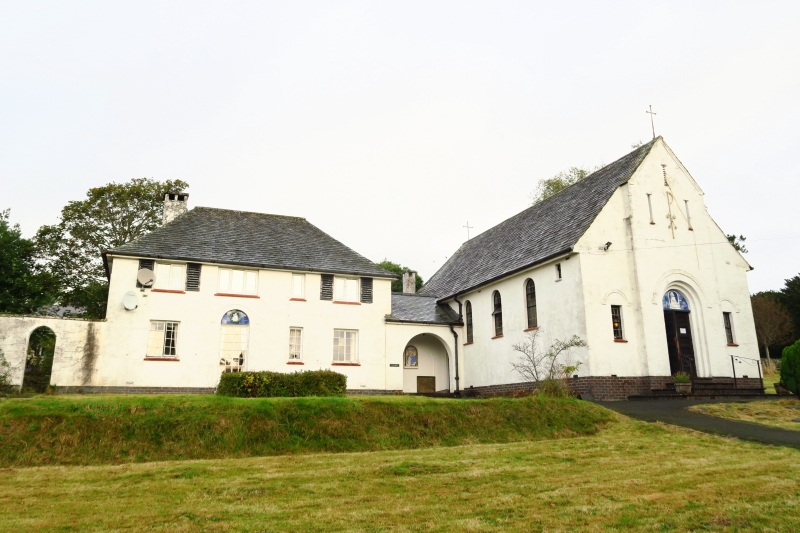 Entry Name: Church of Our Lady of Mount Carmel and Attached Presbytery (RC)

Roman Catholic Church and Presbytery designed by "T H B Scott" of London constructed 1939-40. The total cost was £5,000, Mr Scott, 'a London architect', provided the designs and the builder was Glyn Davies. The three painted lunettes are by May Malburn. The carved stone reredos panel is by P J Lindsay Clarke, according to Welsh Gazette 18.7.1940, where the design is illustrated with a roof-slope bellcote (not apparently built). A 1941 account of the church by Father Malachy Lynch O. Carm. states that the proportions were taken from the Theatre at Garthewin, Llanfair Talhaearn, Clwyd, converted in 1938 from a barn by T S Tait, architect, which also has lunettes over the main brick arches.

The Church is of exemplary simplicity externally, steep-roofed with nave, chancel and 3-sided apse, 3 windows to nave E side, 3 and door to W, the windows arched with red tile sills and rectangular leaded panes. Apse has 2 smaller windows to canted sides. S front has centrepiece slightly advanced with slates continued over and iron cross finial. Arched doorway in three-step surround with very slightly raised arched hoodmould. Della Robbia style ceramic plaque in lunette. Above, two glazed loops each side of wrought iron keys of St Peter, and smaller vent loop in gable apex above. Each side of centrepiece are small narrow square-headed windows under slightly raised arched hoodmoulds. W side door is within single storey link to house, with broad open arch to S.

The Presbytery has steep hipped roof, rendered flat-capped stack on W roof-slope, and 2-storey, 4-window front elevation of small-paned metal casements with red tile sills and shutters to outer windows. Paired casements to outer windows, single narrow light each floor to right of centre, arched doorway with metal French windows to left of centre, triple casement over. 'Della Robbia' plaque in lunette and slightly raised arched hoodmould, as on church. Main door is on E side, in linking porch. To left of house, a roughcast garden wall with arched doorway links to NE corner of small outbuilding with three-quarter hipped gables, open E end and S side casement.

Interior contrasts complex spatial divisions and simple building materials; the chancel and apse are divided off by identical cross walls with broad arches and echoing open lunettes above which give complex views of the roof timbers. Walls are of sand coloured brick with pale grey brick dressings, the chancel and sanctuary arches being of grey brick, as also the lunette surrounds above; the nave window surrounds are stepped, the inner surround being of grey, while the sanctuary wall is semi-circular and entirely of grey brick. Double purlin roofs with bolted nave roofs trusses boarding behind rafters. S end gallery over brick-fronted inner porch with room each side, that E being baptistery. Door to nave, arched with canvas painted lunette, those each side broader and arched with wrought iron screens. Door from nave to presbytery is similar arched with painted canvas lunette.

Included for its special architectural interest as a well designed and harmonious complex of buildings, traditional in inspiration and materials, and significant for its special historic interest as one of the best examples of mid-C20 churches in west Wales. Group value with other prominently sited buildings on E side of Church Street.