A Grade I Listed Building in Bridgend, Bridgend 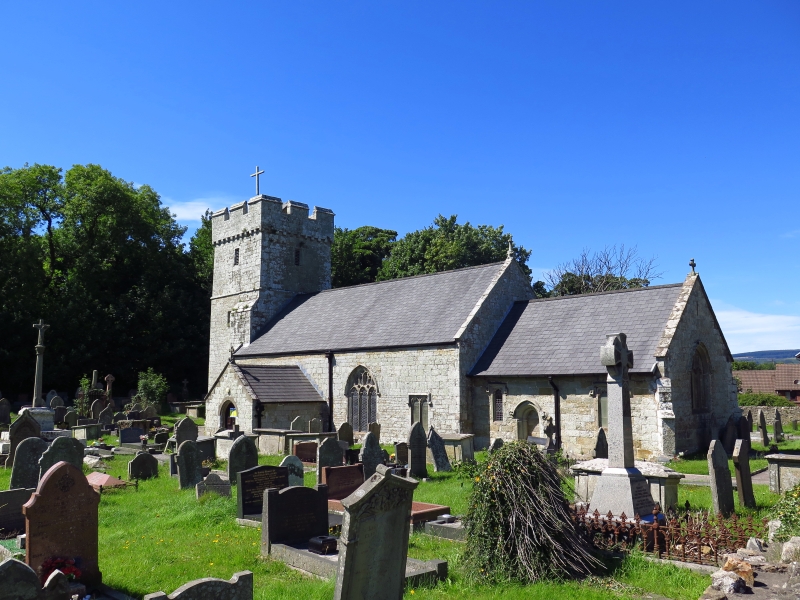 Location: The parish church of St James, Pyle, stands in its own churchyard N of the village centre, on the road to Margam.

The church of St James is said to have been built to replace the original Norman church of Kenfig when it was threatened with being overwhelmed with sand in the later C14, the materials said to have been carried from the old church, or perhaps the castle, for the purpose. The date 1471 on the roof appears to be the date of a rebuilding of an earlier structure here, and there is a documentary reference to it being 'noviter situate' in 1483. The church was restored in 1877, and again in 1891 by F W Waller, when the organ chamber was added and the chancel reroofed.

Built of local limestone rubble with sandstone ashlar dressings. Slate roofs. Nave, with unbuttressed W tower, chancel with an added C19 N vestry, and S porch. Mostly C15, but the nave of two builds, using a squarer stone on the S, the walls battered at the foot. One large 3-light Perpendicular window on the S side, and two 2-light square headed windows on the S wall; 3 on the N wall. One 2-light window to the chancel with label hood and large square terminals, and a blocked priest's door with similar label stop, all medieval. Angle buttresses at the E end. The E window is of 3 lights and also medieval. Coped gables and stone apex crosses. The tower has a tall lower stage, and a short bell stage with crenellated parapet on corbels. Small hollow-chamfered openings and a round-headed W door with wave and hollow chamfer mouldings. A stair extension is at the SE corner.

Nave tall, the walls plastered, and an open timber barrel vault with five moulded runners, rising from wall plates carved with alternating masks and shields, one, towards the W on the N side bearing the date 1471. Chancel arch of 2 wave orders, dying into square abutments, probably late C15. One step up into the chancel, which is also plastered, and which has a depressed timber panelled vault with centre and end trusses, C19. Two steps to the sanctuary which has encaustic tiles. Stone corbels either side of the E window. In the E nave, stone brackets for a wide rood loft, which has a square opening, probably originally a door, through the chancel wall, perhaps for viewing the altar. The loft stair was noted on the N side of the chancel in 1848. Tall tower arch, raised when the upper part was rebuilt in the later C15, and a 4-centred arch to the tower stair, and a medieval mensa re-used as a threshold.

Fittings: Font, of gritstone, octagonal and C15 - C16, with chip-carved roundels alternating with elementary but symbolic carved triple trees, a type paralleled at Llanharry and Llantrisant. Stem broached to the medieval base which has ball motifs on the base chamfer. Pulpit, part octagon, mid-later C19, of alabaster. Gothic arches meeting at serpentine colonettes at the angles, and a limestone figure of St James. The bookrest is supported by an angel, the whole replacing a former timber pulpit in c.1919, and set on a broached limestone base. The former pulpit appears to have been reached from the chancel by a door opening. Sanctuary rail of brass on brass sheathed scrolled stanchions. Linenfold panelling on E wall with a gilded and carved wood reredos diplaying the Crucifixion, a memorial gift to Rees Rees, C20. Pews C19 of pine.

Included at Grade I as a small but well preserved Glamorgan parish church which is still largely of medieval form and fabric, and with a very fine dated medieval roof.