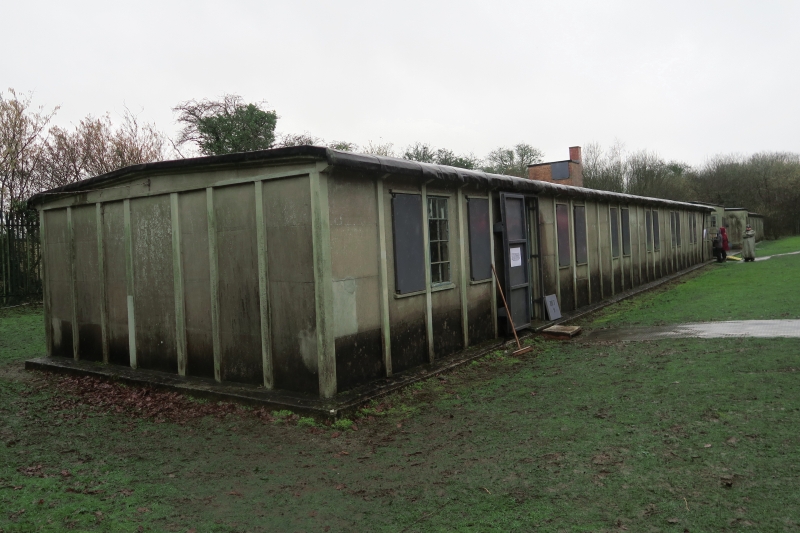 Location: Set back from road at E end of overgrown former camp and reached by concrete roads from A48. Hut 9 is close to and parallel with the SE perimeter fence.

The history of the Bridgend prisoner-of-war camp is of national significance. Originally built in the late 1930s to house female workers employed at Bridgend munitions factory. The strong dislike of barrack conditions led to the camp being empty until 1943 when American troops were stationed there. Prior to the D-Day landings General Eisenhower made a famous visit to the Bridgend Camp to inspire his troops. Shortly after the Invasion of Europe it was converted from a barracks to a prisoner-of-war camp (Camp 198) with accommodation for nearly 2,000 prisoners. Transformation of the camp entailed the erection of surveillance towers, barbed-wire fences, trip flares and a double enclosure within the camp. The first prisoners were ordinary German and Italian troops; then in November 1944 considerable numbers of German officers were brought in. On the night of 10/11 March 1945, 67 prisoners escaped through a 18 metre (20 yard) tunnel S from Hut 9. It was the second escape tunnel from Camp 198. It had taken 3 months to complete and made possible the biggest escape attempt in Britain by German prisoners during World War II. By 18 March all the prisoners were recaptured, though some had escaped as far as Castle Bromwich and Southampton.

The last of 1,634 prisoners left Camp 198 on 31 March 1945. It was then designated Special Camp XI and prepared to receive the most senior German officers, many of whom had been captured in France and were awaiting trial. In all there were 160 officers holding the rank of General, Admiral or Field Marshall. These included General Field-Marshal Gerd von Runstedt, who was directly responsible for the fall of Poland and France, and was held at Bridgend before and after attending the Nuremberg trials. Also held were General Field-Marshal Edward von Kleist, Field-Marshal Erich von Manstein, Field-Marshal Walther von Brauchitsch, Major-General Walter Dornberger (the V2 rocket builder), Admiral Hans Voss, Admiral Huftmeirer and many other senior commanders and SS generals. By May 1948 the last party of prisoners had been removed from the camp, which was officially closed and fittings such as pipes, stoves and furniture subsequently removed. The tunnel was finally sealed in the 1970s.

Plain window openings (chamfered to inside) set into concrete wall-panels, rudimentary concrete dripmoulds. Windows have small-pane glazing in metal frames (original type was a metal casement with vertical glazing bar). The rear windows are boarded over. The doorway to the SW gable end has a plain porch with angle pilasters and a recessed door frame with fanlight. Lock plates indicate that the doors were closed from outside.

Not inspected at the time of survey (May 1998). Previous inspection (1989) recorded: long spinal corridors to the wings with chamfered trusses giving triangular overhead arches, and occasional openings for (removed) skylights, metal brackets for service pipes. Mostly 2-window rooms without locks and single high vents to corridors. One-window rooms with matching cupboards adjoin the central block, which has a further external doorway and brick partition walls. The shower room retains 2-light metal-framed windows (set high) and the collapsed remains of a dummy brick wall where clay from the escape tunnel was covertly stored. The entry to the tunnel is known to have led from the second westernmost cubicle on the S side of the hut. The E end of the hut has an unusual 3-window room and a blocked doorway with an entrance porch and lobby on the N side with locking cupboard opposite. This arrangement may represent the privileged accommodation allowed for the highest ranking officers.

The tunnel, which was planned with the utmost attention to detail, survives under the concrete floor of the second room on the S side. It was originally served by makeshift electric lighting and a ventilation pipe, with a fan (made from food tins); timber shores were devised from camp furniture. Earth was carried away in haversacks or pockets and dumped during exercise or moulded into balls and concealed behind the false wall in the shower room. A striking 'pin-up' of a woman was painted on the wall above the concealed tunnel entrance to distract the attention of the guards.

Included for the special interest of its historical significance for the 1939-45 war.