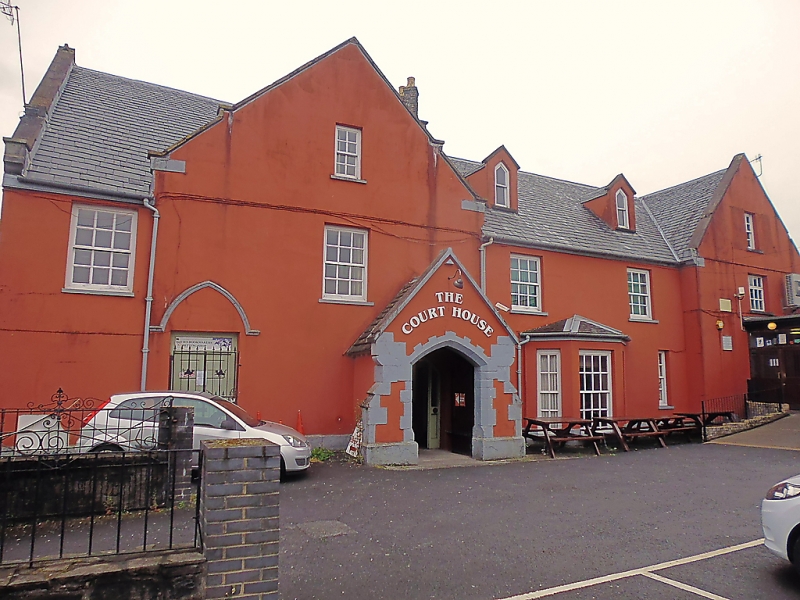 Location: Set at right angles to Court Street which runs NE from High Street and under the railway embankment before passing The Court House to reach the terraced housing on the hillside at Twyn-yr-Odyn.

The stone core of the main part of the house is attributed by RCAHMW to periods of construction in C16 and in the later C17, perhaps as late as1717 after it was sold by Thomas Lewis of the Van, near Bedwas. In C19 a cross-wing was built on to the S of the house, the old building was refurbished with new windows inserted and the porch added to the main front in Tudor Revival style. It is believed to be the earliest surviving structure in the town and thought to take its name from an ancient courthouse on this site. Much of the house was completely reshaped and extended to E and S after it became the Merthyr Tudful Labour Club. Arthur Trystan Edwards (1884-1973), the eminent pioneer of town planning and notable writer on architecture, was born at the Court House in 1884 [plaque on building].

The main 5-bay range comprises a rectangular a two-storey and attic block with flush-set gable over entrance bay and offset gabled, solid porch. Forward to right (SE) end is a second two-storey and attic range with the ground floor largely masked by modern extensions. Plastered and colour-washed masonry walls with exposed stone dressings to gable cappings with kneelers, plinth course linked to chamfered surround of porch entrance and pointed hood-moulding to secondary door on left.
Slate roofs with a pair of pitched roof dormers to centre bays and twin rubble stacks set diagonally over rectangular chimney at junction of roof pitches to right of gable over entrance bay. Single-light sashes to attic windows, double-hung 12-pane sashes to first-floor windows and canted bay with small-pane sashes to centre of ground floor; narrow small-pane sash to right.
Wide single-light gable to road with small-pane sash windows and modern door opening to ground floor. Full-height cross-gable to rear of far (SE) end, plus various lower extensions including masonry evidence (?) of a possible lateral chimney in the angle of the original block and the narrow hipped range to running parallel to rear.

The interior was not inspected. The RCAHMW Inventory records, within the original C16 block, a possible cross-passage to S, under an open roof of four bays. Three plain collar-beam roof trusses survive although mainly boxed in. These trusses have cambered collars that are morticed into the principal rafters which carry three purlins each side and a ridge beam. The RCAHMW's recording suggests that much of this timberwork is re-used. In the roof, the evidence is that the whole building was floored to provide accommodation on two main levels with attics over. Apart from the thick outer walls and the four-bay roof, no visible features survive from the early building. At the same time as this roof was constructed, a gabled front was added to the N part of the house.

Included for its special architectural interest as one of the few medieval houses to retain substantial fabric within the urban context of Glamorgan.