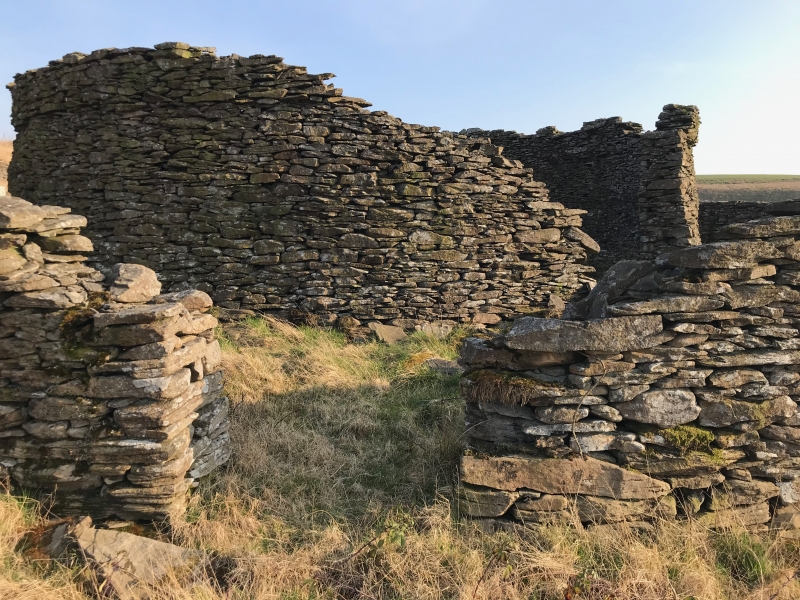 Location: Sited in a forest clearing approximately 3.2km NE of Tonmawr and above Bwlch y Cywion.

Probably built in the C18 or C19, perhaps early C19 when some estate owners were experimenting with new designs. The name Scotch Fald derives from the Welsh ‘ffald’ meaning fold and there is a tradition that the structure was used for cattle brought down from Scotland by a Mr Harghton of Longford Court, Neath. There are difficulties with the theory that it was used for cattle (for example the position and breadth of the only entrance from the outer enclosure) and an alternative suggestion is that it was used for gathering sheep for shearing. The structure is marked as a sheepfold on the 1877 Ordnance Survey. The former drover’s road lies less than 200m away.

The fald consists of 2 concentric circular drystone rubble walls, of which the inner wall is 2-2.5m high. It has 2 entrances that are diametrically opposite, while the outer circle has an entrance on the NE side that is not line with the inner openings. The outer wall is 1-1.2m high, is partly breached, and has rubble stone walls attached that form 3 sides of a rectangular enclosure, open to the S and with the circular fald at the NW corner. The outer walls partly retain flat copings.

Listed for its historic interest as an extremely rare and specialised agricultural building.