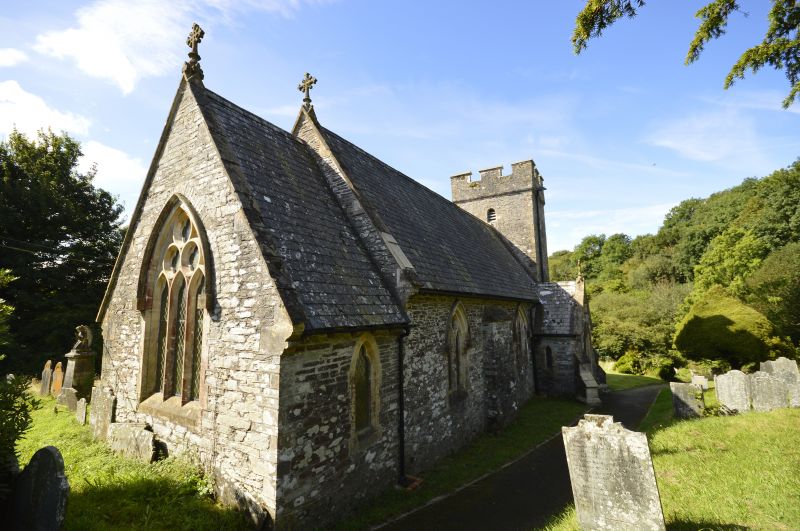 Location: Situated in a rural location on the S side of a minor road some 750m NE of Star.

Anglican parish church of C14 to C15 date, much rebuilt in 1876-89 by Middleton & Son of Cheltenham. The W tower is original, with vaulted basement and the lower part of the walls of the double naves, with the base of a rood stair on the N side. The N nave and tower are suggested as C14 and the S nave C15. An old photograph shows that before the Victorian work the body of the church was much lower, with N nave and chancel and gabled S aisle parallel to nave. Both chancel and S aisle with flat-headed C15 type 3-light E windows. The arcade was of four low plastered arches on square piers. This church was repaired and reroofed in 1827 but was falling into ruin in 1860.
John Middleton made plans for restoration in 1876, but it is not certain how much was done then as R. K. Penson who inspected the church thought too much of the old would be lost and no grant was given. The work was probably done in 1876-9, but not completed until 1889, possibly when the chancel was rebuilt. At the 1889 reopening it was said that the restoration of the main part had been by Middleton & Son, but the chancel by David Davies of Penrhiwllan, presumably to Middleton plans. In the restoration, the walls were raised, roofs were rebuilt to much steeper pitch, all the windows and doors were replaced in correct Gothic style, the N porch was added, and internally the arcade and chancel arch were replaced. A slate pyramid steeple was added to the tower to compensate for the loss of proportion, but was removed in 1973. Three bells dated 1876 were in the tower, but two were sold 1987.
The three inscribed stones inside and the carved font and stoup are notable early features.

Rubble stone exposed within. Tower rear has very low pointed tower arch to tower vault, some 6 feet (1.75m) to apex, with long stone voussoirs. Long straight joint to left, tapering inward, possibly the side of a blocked opening to right, with stone voussoirs, partly behind end of nave arcade. Another set of voussoirs at mid-height to right and small rectangular opening in centre. Nave has 5 steep arch-braced collar trusses with brattished collars and Y-struts above, on ashlar corbels. N side has door and two windows in C19 ashlar surrounds. To right of door is C13 or C14 stoup with 3 sides divided by two raised strips, the outer sides with elongated oval relief heads, a bishop to right. Pointed chamfered head to recess. N side medieval rood-stair door with original chamfered jambs, flat lintel replaced. Stone steps within
Pointed double-chamfer chancel arch the inner order rising from moulded corbelled capitals, the corbels left uncarved, outer order continuous to ground with bar stop. Slate flagstones. Short chancel with 6-sided boarded and panelled roof. Three steps to sanctuary with slate treads, tiled risers. Tiles in sanctuary floor. Moulded sill band below E window.
South aisle is similar to nave, divided by four-bay arcade with double-chamfered pointed arches on 3 round columns with moulded caps and splayed bases, and two similar half-column responds. Similar roof trusses on corbels. In SE corner of S aisle is timber Gothic vestry, later C19, with leaded glazing to lights with band of glazed quatrefoils over. Matching half-glazed door.
Fittings: fine cushion shaped square font, with semi-circular faces each with semi-circle outlined in raised strips and with vertical stroke bisecting a small semi-circle in centre below top line. Pine pulpit on octagonal shaft base, with blind tracery, later C19. Reading desk with traceried front. Pews with pierced small quatrefoils in bench ends. Plain oak lectern 1911. Plain rails on 4 turned columns.
Memorials: N wall C19 plaque to ancestors of Mariamne Thomas of Lancych died 1837, back to Thomas Llwyd of Dolau Llanerch died 1738. Slate plaque recording church and chancel being new roofed and repaired 1827.
Archaeological remains: at the rear of the church are three inscribed stones and a piece of a C15 cusped flat-headed window found in the churchyard 1995. The three stones are all inscribed: 1. Has Ogham letters on left reading possibly D-V-TUCEAS or DOFOTMAQIS which may correspond to the inscription DOBTV....FILIVS EVOLENC-, C5-C6, and an incised C9 wheel-cross with shaft and base has been carved over the inscription. This stone was built into the granary steps at Dugoed 2. Has Latin inscription SOLINI FILIVS VENDONI, C5 or C6, formerly built into left pier of the lych gate. 3. Has Ogham letters on left and right reading ETTERN ..... TOR corresponding to inscription ETTERN- F-LI VICTOR. C5 or C6, formerly by N wall of churchyard, flat-topped, said to have been once used as a sundial.