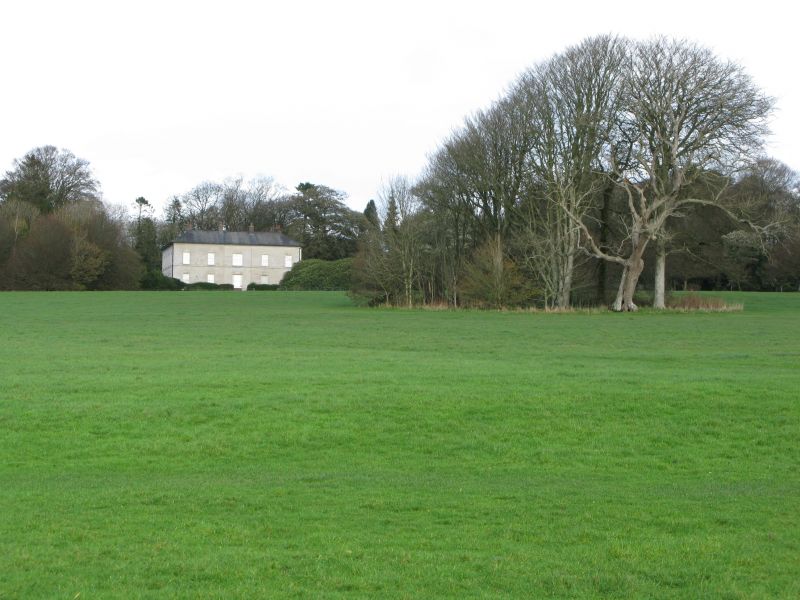 Location: Situated in own grounds on W side of B4329 some 1.5 km SE of Spittal village.

Country house of 1840 built for the Higgon family to designs by William and James Owen of Haverfordwest. It cost about £3,000. The Higgon family had been owners since the C16, the old house was burnt down in the mid C18 and the family moved to Haverfordwest. Since 1972 owned by Pembrokeshire County Council, and open to the public.

Country house in restrained neo-classical style, unpainted stucco, lined as ashlar with slate hipped roofs and flat overhanging eaves. Rendered chimney stacks, 2 on ridge of S range, 2 on ridge of E range and one on W range. Five-window S front to garden, 3-window E entrance front and 4-window W front, all with raised plinth, sill band at first floor and band under eaves, the windows with heavy stepped voussoirs and keystones, generally 12-pane sashes above and late C19 or early C20 plate-glass sashes below. S front is in 2-1-2 bays, the centre bay recessed with tripartite sash each floor, 4-12-4 above, plate-glass below. E front has similarly recessed centre bay and door is further recessed in loggia of 2 pairs of Ionic columns with entablature over. Within is large half-glazed door with sidelights and 1-3-1-pane overlight in frame of thin panelled piers with paterae at intersections. W front has 12-pane sashes both floors and basement door under second window from left.
Rear is utilitarian, with hipped one-window end to E front, the windows blank, recessed centre and right with 2 gables and large arched stair light with marginal glazing bars. Right has gabled NW service wing with added lean-tos. There were outhouses to N demolished in 1970s.