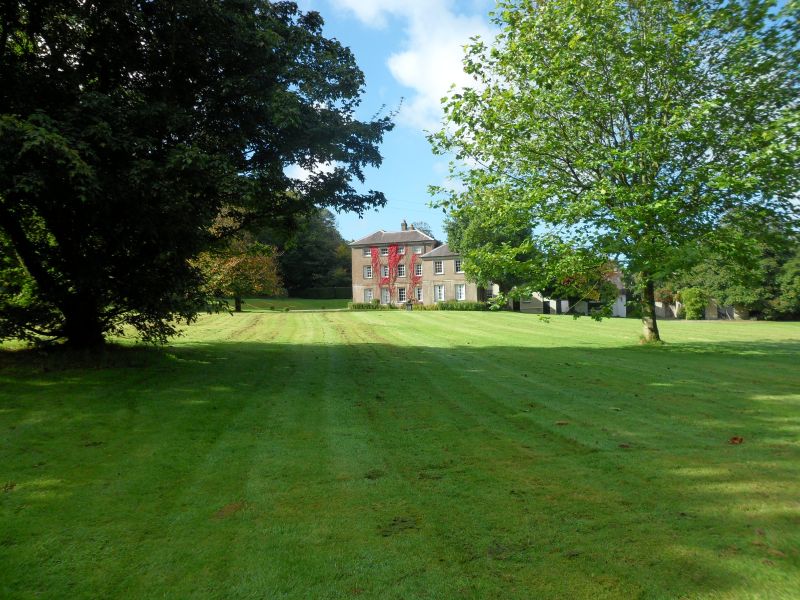 Location: Situated some 1.3 km E of the A40 and just N of the airfield at Withybush.

Country house of mid C18 origins, altered in early C19 and 1900-2, the last to plans by D. E. Thomas of Haverfordwest. Recorded from C15, and a gentry house mentioned in late C17. The Reynolds and Prichard families preceded the Pictons who were in the parish in the C17 but only owned Poyston from the early C18, John Picton (d 1722) being the first recorded there. Thomas Picton (d 1727), Thomas Picton (d 1790), General William Picton (d 1811) and Major-General John Picton (d 1815) are all buried in Rudbaxton Church. General Sir Thomas Picton, killed at Waterloo (1815) and buried in St Pauls Cathedral was the most famous. He was born in 1758 in Haverfordwest as Poyston was then being rebuilt. Called a respectable mansion by Fenton in 1811, but by then not the main seat as General Sir Thomas Picton had bought Iscoed, Carms., c1806, and that became the Picton seat to 1917. Poyston was sold by the Rev. Edward Picton, the general's brother, before 1845 when it was owned and occupied by the Rev. Thomas Phelps Martin, owner also of the adjacent Withybush estate, and both estates were sold, c1850, to William Owen, architect, developer and four times mayor of Haverfordwest. Owen lived at Withybush. Poyston was altered 1900-2 for his son Dr Henry Owen, noted antiquarian, prominent in the foundation of the National Library. The library that he had added is an exceptional example of a gentleman scholar's book room. Occupied by Major Frederick H. Linton DSO (b 1884) in 1926.
The progress of the house would seem to be that the oldest part is the NW rear wing, the W outshut perhaps older than the E front, this being the house rebuilt in 1758, and the big S front block added c1820-30, altered 1900-2. This however is not consistent with the history, as there was little incentive for so large an addition after 1806, either for the Pictons or Phelps Martins, until William Owen in the 1850s. It is possible that the front block is a remodelling of a C18 structure, for the glazing bars on the first floor are thick for the early C19, but if so still a very extensive work. The front block was altered by William Owen with 2 stone porches, removed in 1900-02. The remodelling then included a rich timber cornice, the addition of the NE library, the stable range and the timber front porch. Inside, the SW room was opened into the entrance hall, and given a fine Arts and Crafts fireplace celebrating General Picton, the SE and NE rooms also had new fireplaces, the staircase was replaced, and armorial stained glass installed, to designs by A. J. Dix. In later C20, the rear wing E side was altered for an enlarged kitchen.