Church of Saint Martin of Tours 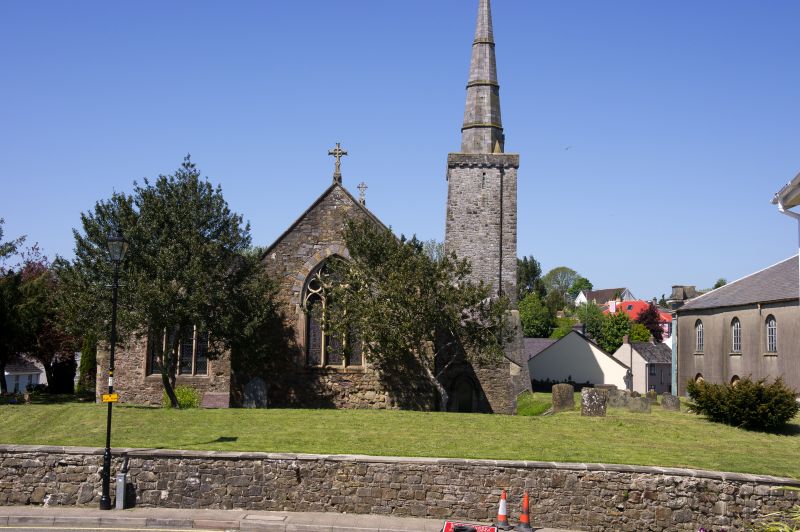 Anglican parish church of Norman foundation, said to have been built 1120 in association with the Castle. First recorded in 1256. Nave, S porch and chancel possibly early C14 with added late C14 or early C15 tower and early C16 S aisle, at which time a priest's room was built over the porch. In poor condition in the late C18 and early C19, said to have 'little of its original character' in 1833. The capitals of the chancel arch were chiselled off for a flat plaster ceiling in 1839-40. Extensively restored 1862-5 when the arcade was rebuilt, the roofs were replaced to a steeper pitch, a N aisle was added to the chancel, and all the windows were renewed. The architect was C. E. Giles of London, the clerk of the works Jesse Harvey of the Prendergast paper mills. The work cost £2,000. The spire was rebuilt in 1869-70, under Giles & Robinson architects, 15' higher than previously, at 47'. Edward Laws writing in 1888 claimed that the previous spire replaced or was built on top of a saddleback roof
Noted from the later C19 as one of the few Anglo-Catholic centres in St David's diocese, due probably to the patronage of the de Winton family of Brecon, and the parish was much in conflict with the bishops. Notable successive incumbents were Fr. John Popplewell from 1879, Fr Martin Phelps from 1889 and Fr Arthur Baring-Gould from 1908 to 1953. Fr Popplewell acquired the Father Smith organ of 1704 from St David's Cathedral. The church was frescoed, like Monkton church, in 1895 by C.G. Gray of Cambridge, but these were whitewashed over by Baring-Gould who also ejected a screen and reredos. The S aisle was made into a Lady Chapel in 1909 in memory of Father Phelps.

Parish church, brown rubble stone with slate roofs and coped gables with finials. Nave and chancel with NW tower and spire, parallel-roofed S aisle and lean-to chancel N addition.
Tower is thin and plain in typical S Pembs C15 type, mostly in grey stone, the bottom heavily encased in 1857 in sloping masonry in cut grey limestone. Tower has minimal loops for bell openings and corbelled low parapet. Recessed octagonal spire in grey limestone ashlar, of 1866, with three moulded bands and finial in Forest of Dean stone. Nave has large W window in Bath stone with elaborate late Gothic tracery of the 1860s. Nave S has no window before S aisle with has three-sided stair turret in angle to nave, with slate roof lean-to against aisle W end, the chamfered corner of the tower brought to square with C19 ashlar corbels. Plain C19 pair of pointed lights to W end, lighting priest's room over porch. On S side of aisle, porch has C19 pointed entry with hoodmould, two chamfers, the inner one carried on column shafts with moulded bases and capitals. Squared stone voussoirs in two colours of stone. Within the porch is early C20 wooden screen with three pointed doors and boarded tracery above.
S aisle has three C19 three-light S windows of the 1860s with roundels in heads and E end surround of an original Tudor-arched 4-light window with renewed panel tracery and hoodmould, original stone voussoirs and keystone. Lower chancel has one renewed lancet in S wall to extreme left, the wall of the added S aisle anted in to expose it, and a C19 2-light S window. Large C19 three-light E window with big sexfoil in head, hoodmould and bi-colour cut stone voussoirs. N side has C19 lean-to addition with E end single light, N side door and 3-light. Nave N has three bays divided by two big stepped C19 buttresses. Tower is against first bay, the other two have C19 pointed 3-light windows with quatrefoil roundels in heads, and bi-colour stone voussoirs.