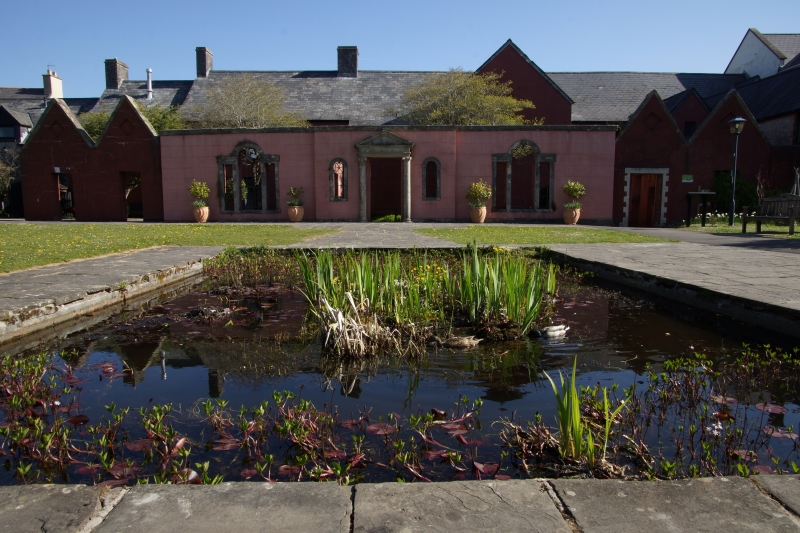 Location: On long site, to W of Masons Arms PH.

C16 origin; remains of C18 S front, north (front) elevation much overlaid with features in a C19 Tudor style, including window dripmoulds and a porch and NW gable. By 1970s the building had declined structurally and total demolition was proposed, but the building was instead extensively renovated in 1975 by Alex Gordon and Partners, who retained ground floor of the rear (S) C18 facade (known from old photos) as single-storey screen wall. The Old Hall was the property of the Edmondes family; Dr Benjamin Malkin (1776-1842), traveller and social reformer, also lived here.

Two storeys, C19 Porch and 3-window N gable faced with stone in snecked courses; porch and gable set between recessed blocks of 3 and 4 windows with cement rendered cladding to ground floor, and first floor with pebbledash; slate roofs. To R of gable, block with Tudor doorway with window to R, then long wing with roof sweeping down over first floor. Of the C18 rear wing, there remains as a screen the ground floor of the SW elevation. Rusticated ashlar with later C20 tracery to window openings. Central projection with pedimented Ionic entrance with immediately flanking single round headed window openings to each side, flanked in turn again each side by a Venetian window opening. Two gables to former wings at each end. Long, renovated NW wing with vehicular gateway at NW end; beyond the gateway, a stone boundary wall, mostly retaining its plinth and coping, which returns to the SE end of Ye Olde Masons Arms.

Included in spite of the form of the C19 exterior and of the C20 renovations for surviving C16 and C18 structure and for historic interest. Group value with adjacent listed buildings in High Street.