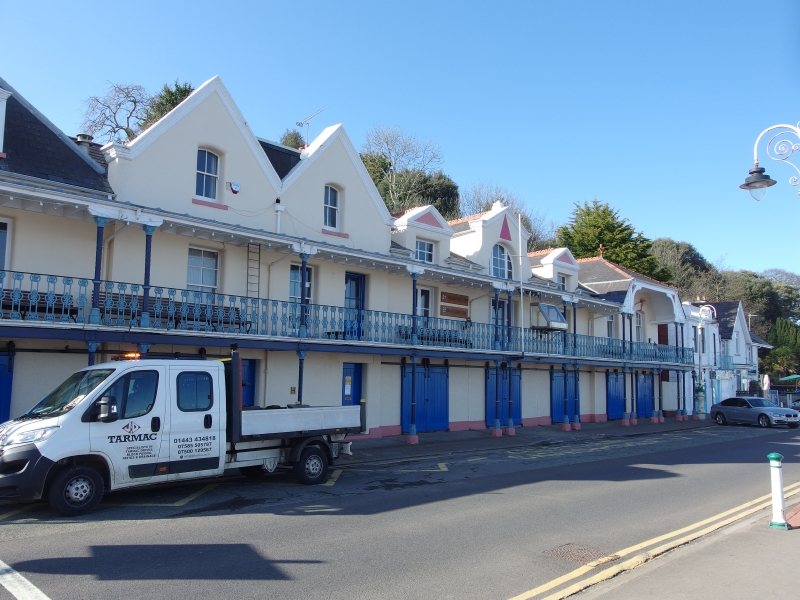 Two storeys. Rear wall at SW end of red brick with white brick lacing course at eaves. Front and side walls with (painted) roughcast cladding to ground floor and stucco upper floor and attics. Slate cladding to roofs, enlivened in front pitch by attic gables of varying shapes.
Red ridge and crest tiles and terracotta finials. Front elevation with balconied verandah of seven (first floor) and eight (ground floor) bays; supported on fluted twisted cast-iron columns with Corinthian capitals, the columns in pairs except between fourth and fifth (first floor), and fifth and sixth gables (ground floor) from north end. In centre of northernmost gable, coupled columns on ground floor only. Balcony balustrade with stone flagged balcony floor and exposed wooden joists to flat balcony roof. Verandah returns along side elevations, with curve at SE angle.
A series of ledged doors on ground floor, with a pair of ledged sliding doors each to gables two to five, and gable seven from N; a single pedestrian door below fifth gable and a similar pedestrian door below sixth gable.
Mansard-shaped roof at N end which projects forward as a wide gable with hipped end and bargeboard; two segmental sashes descending to balcony floor; keystones. Second and fourth gables each in form of pedimented dormer, with two-light French casement below on balcony storey. Third gable with moulded cornice and shaped sides with three-light semi-circular attic window and French casement with side lights on balcony storey. Fifth and sixth gables in form of two projecting conjoined gable ends each with segmentally-headed sash windows to attic and with a sash window below descending to balcony floor. Fifth gable also with three-quarter glazed balcony door. Seventh 'gable' in form of segmental pediment to two-light dormer in separate hipped roof with two modern two-light French casements on balcony storey.
South return elevation retains the balcony but with balustrade finials instead of columns and with verandah columns enclosed on the ground floor. Three bays. A rectangular bay window with sash lights at balconies at each end, each with a two-light segmentally pedimented dormer over. Centre bay with two-thirds glazed door with sash side-lights; attic lunette in rectangular surround with shaped sides and crowning moulded pediment.

Inside, contemporary staircase with stone steps and iron balustrade.