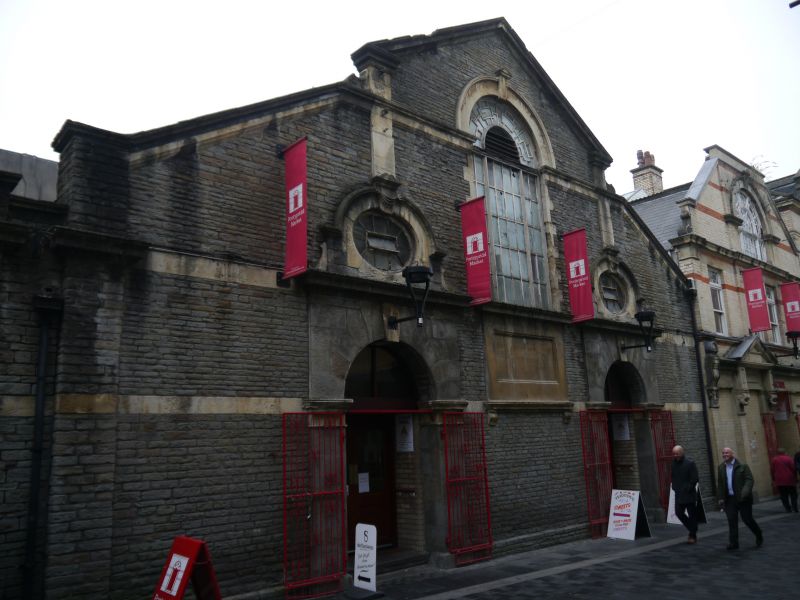 Location: In the town centre, uphill from and W of the attached Market Chambers.

Built in 1885 as Pontypridd's Town Hall, at a cost of £1600. The contractor was William Seaton of Pontypridd. It was superseded by the building of a new town hall in 1890 (now known as the Arcade) and became a market building.

In a Mannerist style, of coursed rock-faced stone with freestone dressings and slate roof with glazed strips. The 3-bay front has an interrupted gable rising to a central pediment. A tall central round-headed window with keystone rises into the gable and has small-pane glazing. Flanking pilasters drop down in Mannerist style on to the labels of oval shaped windows. Round-headed doorways directly below have tooled architraves, imposts and cornices, and replaced doors and gates. Between the doorways is a blind central panel with a corbelled sill. A similar side entrance to the L beneath a gable closes the space between the Old Market Hall and the 2-storey range of shops beyond.

The Old Market Hall can also be entered by a passage from Market Street between Market Chambers and the Market Tavern Hotel. Set well back from the street it is known as the 'Reserve entrance' on the slender ironwork over the heavier cast iron gate. Above the gateway is a Dutch gable and finial, and a roundel in the gable. Flanking white-brick pilasters are corbelled out from gate hinge level.

The 9-bay roof has thin steel trusses. The floor is stone flagged and retains some early fixed timber stalls.

Listed for architectural interest as a prominent public building retaining original character, and for group value with Market Chambers and other nearby listed items.