A Grade II* Listed Building in Peterston-super-Ely, Vale of Glamorgan 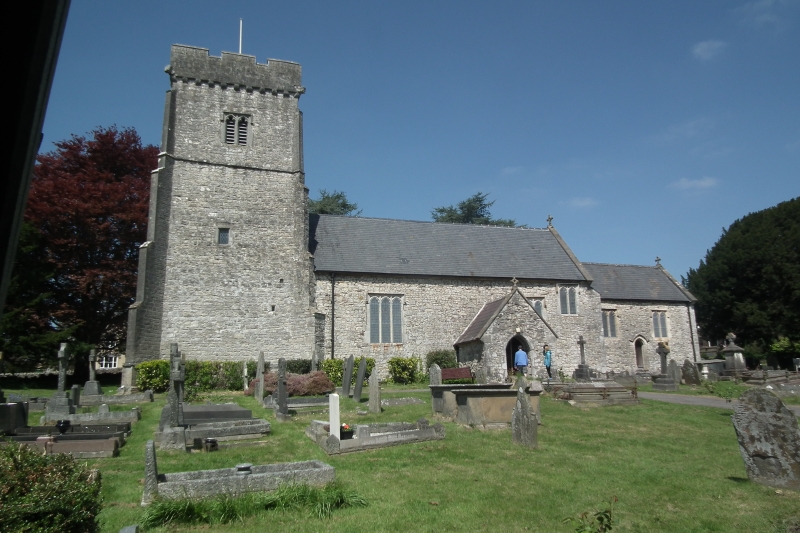 Location: In the village centre set within a large walled rectangular churchyard with entrances at SE and SW.

Mostly Perpendicular masonry though the tower appears separately designed; chancel arch is earlier, probably C14. Restoration of 1890 by Kempson and Fowler included substantial work on chancel. Churchyard cleared in C19 as shown by the higher roots of the older yews.

Interior is rendered. Narrow nave with roof of 6 bays of arch-braced trusses with 2 rows of purlins rising from wooden spur corbels below wallplate, low ridge piece with bosses at intersections with trusses. Wide W interior arch is moulded but with no capitals and filled with a carved oak screen in memory of the Vaughan family 1947; very small chamfered pointed staircase tower arch adjacent to S. Small octagonal later medieval font at SE with very weathered base and tall wood cover with tabernacle work of C19. Pulpit c1873. Brass lectern of an angel figure. Chancel arch is tall and pointed, with the inner chamfered order unusually dying into the jambs; to S are the pointed-arched doorways at 2 levels formerly giving access via stone steps to the rood screen; wooden chancel screen. Terrazzo floor to sanctuary up 3 steps; to left (N) of altar is a tall moulded recess now filled by an aumbry; polychrome wooden reredos. Organ of 1892. Stained glass E window of 1891 by A Savell and further stained glass in nave, possibly by Joseph Bell of Bristol and others. Some C18 stone wall monuments to local families