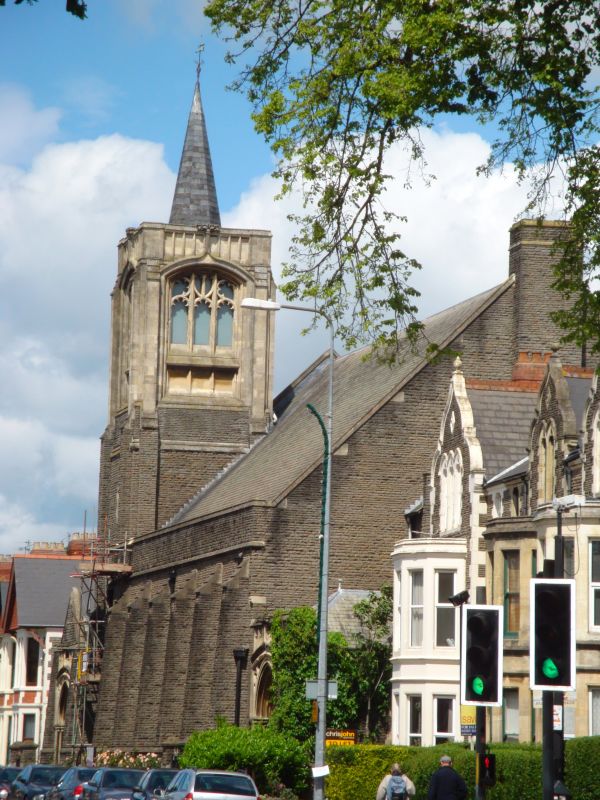 Location: A prominent building situated at the north end of Cathedral Road near the entrance to Llandaff Fields.

The church is faced with thin courses of dark brown Pontypridd stone rubble, with ashlar, probably Bath stone, dressings. Welsh slate roof with lead to the spire. Seven bay nave with six bay aisles, north-west tower with entrance, large porches also at south-west and north-east corners. Late Perpendicular style with both Gothic and Arts and Crafts details. The street (south-west) elevation is of six bays with a vestibule at the north-west end and vestries etc. at the south-west end. Each bay with 2-centred headed window of 2-lights with mouchettes and reticulated heads; relieving arch over; flanked by battered buttresses. Parapet with band above, very steeply pitched roof with large chimney stack on south-east gable. At the south-west end there is a large porch with battered buttresses; doorway with moulded arch and clustered columns; carved spandrels; band of panelling above doorhead punctuated by onion flower motif. At the north-west end similar porch with gable over at the base of a square Perpendicular style tower. This is of four stages with full height clasping buttresses. The porch facing Cathedral Road and a 4-centred arch window facing Gileston Road are on the ground stage. The first stage has similar windows facing in both directions for the ringing chamber. The second has slit windows and the belfry stage is ashlar with a large 3-light opening with Perpendicular tracery above a panelled apron and beneath a segmental arch. Panelled parapet and small spire.
The south-east gable carries large flues rising from the vestries to the gable stack. The north-west gable has a very large window with reticulated Perpendicular tracery, 5-lights, 1 3 1, with ashlar buttresses rising as mullions and through to the cornice above. The rear elevation has aisle windows as before.

The interior was reported at listing (May 1975) as having a timber roof with single wide span and plastered walls. It was converted to offices in 1993-4 and is wholly ceiled so that the roof is no longer visible, but is reported as surviving. The aisles are still single spaces where the interior of the windows and the brackets for the roof trusses can be seen. The nave is partitioned and the arcades are hidden. All the furnishings have gone and the floors are covered over. The organ front survives in the north aisle. Some of the part glazed doors survive. The roof structure was not seen at resurvey, the tower was seen but this was reroofed in 1993-4.

Included as a good Edwardian non-conformist church which has been very little altered.