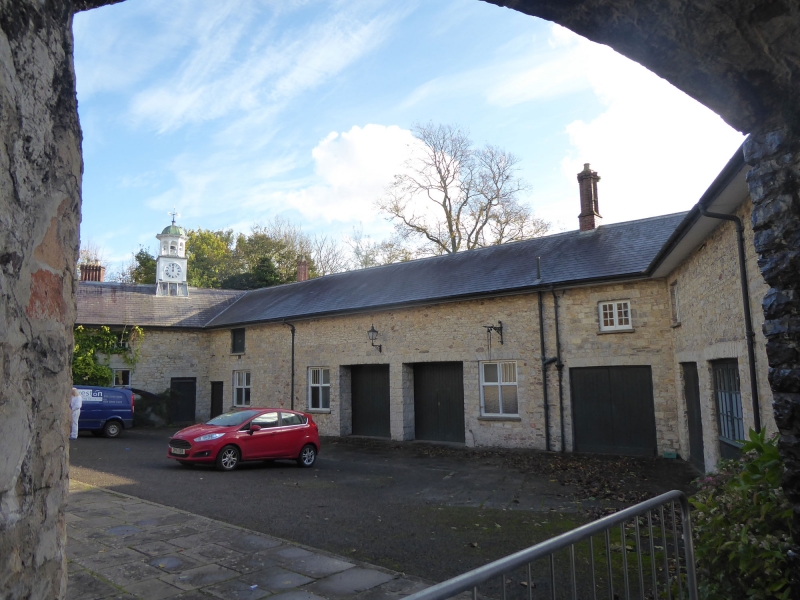 Location: One of the estate buildings associated with St Fagans Castle and close by it on the south-east.

Present structure built 1868-9 and designed by W P James who was extending the castle at that time. It shows stylistic qualities akin to those found in Plymouth Estate cottages of the same period. Detached blocks are shown on earlier maps, eg Plymouth Estate Map of 1766 but there is nothing to suggest that anything of these survives.

The present structure comprises three wings with local stone rubble walls, Welsh slate roofs and red brick stacks with tall ribbed shafts, which are built round three sides of a courtyard.
The Eastern Wing is crowned by a clock and octagonal cupola: eastern elevation towards Castle Hill with two gabled dormers and a rebuilt external chimney, segmental arched doorway and a flat arched window: towards the courtyard it has a 2-light wood casement with 6 6 pane margin lights on the first floor and, on the ground floor, two mullion-and-transom windows and a doorway, all with flat stone heads with small voussoirs.
Courtyard elevation of Southern Wing has a loft door and a small 6 6 pane casement window with stone head on the first floor and on the ground floor, two wide and one small doorways and three mullion-and-transom windows.
Courtyard elevation of Western Wing has on the first floor two small 2-light casements with 6 6 small panes and, on the ground floor, two wide doorways, a house doorway and a 2-light casement with small panes.
A wide segmental headed archway of stone with embattled parapet connects the northern gable of the eastern stable wing with the outer boundary wall of castle.
The north-west end of the western wing is joined to the medieval castle wall and the western elevation of this wing stands on a steep prominence overlooking the cottages on Castle Hill; on the upper floor there are four 2-light casement windows with flat heads, with another three similar ones in the south gable end.

Not inspected at resurvey.

Included as a good C19 stable block and as one of the structures associated with the gardens and estate of St. Fagans Castle.