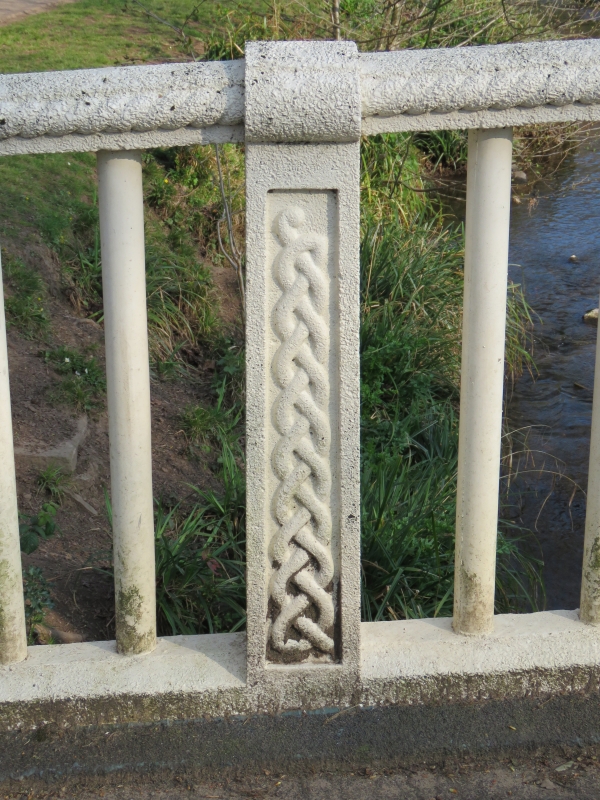 Location: Spanning Roath brook and reached from the path NW off Alder Road.

Roath Park was the first publicly owned park in Cardiff and was designed to provide a wide range of recreational facilities for the inhabitants of east Cardiff. The land was dontaed by the 3rd Marquess of Bute, Lord Tredegar and other land owners. The park was laid out by William Harpur, the borough engineer, between 1887 and 1894. The S end of the park, between Ninian Road and Ty Draw Road, was conceived as Pleasure Gardens, with recreation ground further E. The footbridge over Roath brook was built in 1894, an especially early example of reinforced concrete construction, and probably uses one of the reinforced concrete systems as an alternative to the well known Hennibique system.

Single-span footbridge built and decorated in reinforced concrete. A shallow segmental arch has rope-moulded ornanmentation and short spandrel columns. The parapet has rounded balusters and intermediate piers with Celtic interlace in low relief, and roll-moulded hand rail. Pergolas at the ends each have 2 pairs of uprights with vine trails in low relief. The deck is re-laid in coarse concrete and is ramped to a flat centre.

Listed as a rare-surviving early concrete bridge, retaining intricate Celtic detail not normally associated with concrete construction, for its contribution to the character of Roath Park Pleasure Gardens, and for group value with other Roath Park bridges in Plasnewydd and Cyncoed communities.