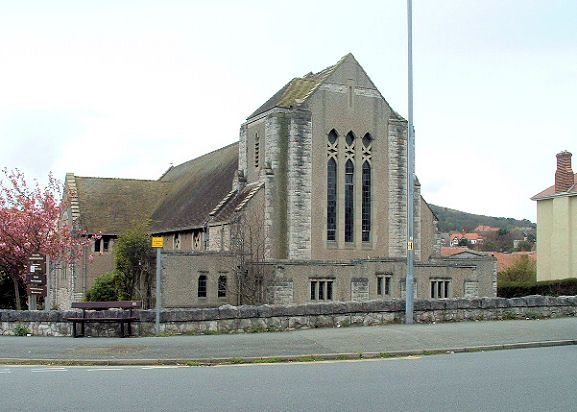 Location: On the corner with Abbey Road.

Built in 1929, as a Congregational Church, and designed by Bradshaw, Gass and Hope, architects, of Bolton.

Rusticated local limestone and roughcast render; concrete tiled roof. Conventional cruciform plan with tower at north end, nave with lean-to aisles and transepts. Hall at S end reads externally like a chancel, with a lower roof-line on the same axis. Flat roofed block in the angle of the hall and E transept. In detail, the building is a highly original interpretation, owing as much to Art Nouveau as to Gothic. North tower is set within the main roofline: a saddleback tower with subsidiary hipped bays projecting to E and W. These are clasped by buttresses which form the copings of their roofs. Tall arched triple windows in N wall, with unmoulded tracery of crossed arcs. The low aisles are divided by pilaster buttresses, with triple flat headed windows in each bay. Chamfered 4-centred archway in very shallow gabled porch towards N. Clerestory has circular windows in octagonal architraves, with diagonal unmoulded interwoven tracery. Transept windows are flat headed with shallow relieving arches over: 3 lights, with unmoulded tracery of crossed arcs in each light. Paired flat-headed windows with similar tracery set high up in bay to S of crossing. Hall beyond has paired windows forming a band in its S wall, with a circular window in the gable apex.

A striking and original design, bold in detail, and particularly dramatic in its internal planning.