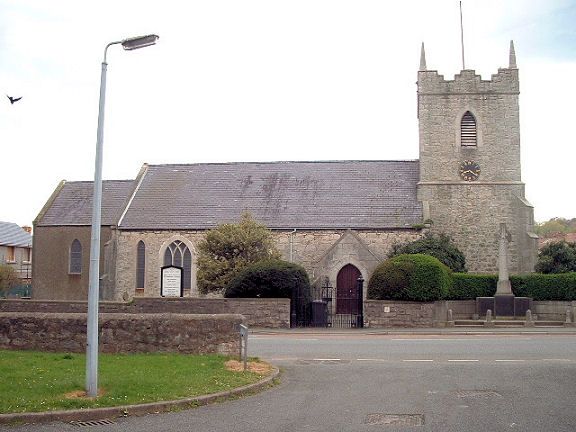 Location: On the corner with Church Walks.

The church was built in 1837 as a chapel of ease to Llandrillo, and became a parish church when the parish of Colwyn was created in 1844. The building was twice restored later in the C19, and the internal fittings probably largely date from these restorations, c1871 and c1892.

Simple nave and chancel: nave articulated as 5 bays by the principal arched braced collar trusses of its roof, though with only 2 windows in each side. These windows, together with the chancel N window, have emblematic staned glass using floral and foliage motifs on geometric forms: they form a series, and are signed and dated, Cox, Sons, Buckley and Co., 1886. Low stone screen divides the chancel from the nave. Encaustic tiled floor to sanctuary. Painted stencilled text surrounds the chancel arch and the arch to organ chamber to S. The chancel N and S walls are also covered with stencilled decoration, and to either side of the E window, painted metal panels illustrate biblical themes. Stained glass in E window (the crucifixion with Saints Catherine and Asaph), dated 1892 (and replacing an earlier window of 1844 by Clutterbuck).

Interesting as an example of a C19 Gothic church which pre-dates the Puginian Gothic Revival.