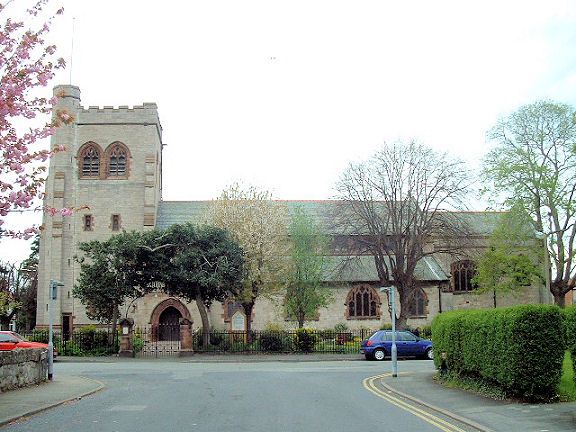 Location: On the corner of Station Road and Cliff Road.

Built 1899-1903, and designed by Douglas and Minishull, architects, of Chester. The foundation stone was laid in 1899 by Mrs Eleanor Frost, a significant local patron of the firm of Douglas. The W tower was originally intended to have an octagonal upper stage with low spire, but instead, the present tower was built in 1912, designed by Douglas, Minshull and Muspratt.

Local limestone with red sandstone (Runcorn) dressings, and green slate roof. West tower, nave with 2 aisles and clerestory, chancel with organ chamber and vestry forming N transept. Perpendicular in style, with panel tracery to windows. Tower has angle buttresses and 2-light windows in lower stage, paired bell chamber lights above. Semi-octagonal stair turret at SW angle. Embattled parapet. S aisle windows of 2- and 4-lights, and gabled porch with deep moulded arch towards W. Clerestory windows grouped as 2 and 3 untraceried lights, with shallow arched heads cut from a continuous wall-plate or lintel. 4-bay N aisle, with lean-to porch towards W, and short richly traceried windows with hood moulds. Narrower E bay with higher gabled roof, 2-light window, and paired windows in the upper storey. Shallow pilaster buttresses mark the outer angles of the aisles. Vestry range has paired 2-light flat-headed windows to ground floor, and 3 arched windows above. 5-light E window to chancel, and 2-light N window, the S windows of 4 and 2 lights are of varied form and are linked by a contiuous, stepped hood mould. Clasping buttresses to either side of the gable.

Plain chamfered W tower arch; 5 bay arcade, with octagonal piers, the main arch mouldings and hood moulds springing from moulded caps. From the springing of the hood moulds also rise the stone wall posts of the roof, which is a complex hammer beam construction in 2 tiers. Lean-to aisles also have heavy timber roofs. Chancel arch with hood mould, and low stone wall carrying fine wrought iron rail, with pulpit (linenfold and traceried wood panels raised on stone base) offset to N. Organ and vestry to N of chancel. Wagon roof to chancel with curved principal trusses carried on moulded brackets. Choir stalls probably form part of the original design, and have poppy heads and traceried panels to bench ends. Reredos was completed in 1931: the main part of it (possibly part of the original design from the office of Douglas) takes the form of a triptych, with low relief panels surmounted by flowing, traceried canopy work and frieze. The rest of the E wall is panelled with blind perendicular tracery. Alter rails also of 1931: wrought iron vines, with gilded wheat stalks on the uprights.

Stained Glass: Transfiguration in chancel E window, saints figures to N and S, and New Testament miracle to S, none signed or dated. South aisle E window of 1914, by Kempe and Tower; and a pair of windows in the S wall (one dated 1903), possibly by Ward and Hughes. West window dated 1907, and probably from the same studio as the aisle windows.

A fine example of the work of Douglas and Fordham, with good internal detail.