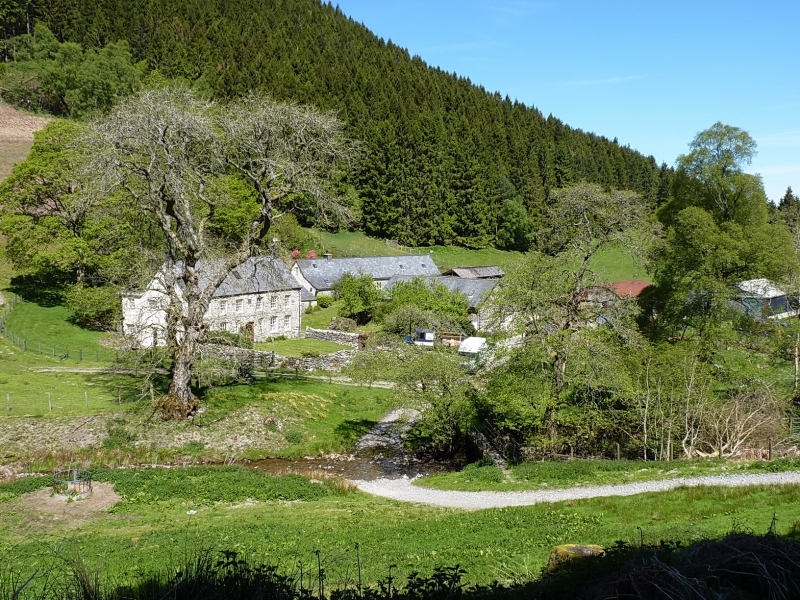 Location: The house is at the head of Cwm Pennant, at the end of a minor road which leads S from Llandrillo. Set in gardens and facing E.

Large centrally-planned farmhouse bearing a tablet 'JL 1728'. The initials are thought to relate to John Lloyd, who married Mary Jones of Cilan. The plan-form is probably little altered since the early C18, although the house was re-windowed in the Victorian period. It is shown on the tithe map of 1843.

Symmetrical 6-window 2-storey house constructed of rubble stone under a slate roof with blue brick end stacks. Rough boulder plinth visible in places. Central entrance, the windows grouped in 3's to either side of it. Doorway with renewed half-glazed panelled door under a brick arched head, flanked by narrow small-pane side lights. Elsewhere, the windows are 12-paned horned sashes with cambered heads of narrow stone voussoirs to lower storey; flat heads with rendered surrounds above. Rough string course at 1st floor level. In the centre to the upper storey is a decorative slate tablet reading 'JL 1728'. The roof pitch has a central skylight. N gable end has former doorway, blocked with stone, offset to L; small 4-pane window to R. Lower rear wing to R, probably late C19, with renewed half-glazed panelled door with overlight to L, 2-light casement window to R, and similar casement above, all with red brick surrounds. Slate tablet over door reading 'M 1978'. The S gable end is roughcast, with door as elsewhere to L, renewed casement windows above and to R. To the L, is a further rear wing added c1950. Rear elevation cut into bank, not seen.

No access to interior at time of inspection. Recorded in 1994: The house is planned with 2 principal rooms flanking a wide central hall-way. The timber-framed partition wall on one side of the hall-way has been exposed. Massive projecting fire-place in the principal room with roughly chamfered bressumer. Both the main rooms have two spine beams, chamfered with run-out stops. Halved and pinned A-frame trusses to roof.

Listed as a fine example of an early C18 large vernacular farmhouse, which has retained much of its original character.