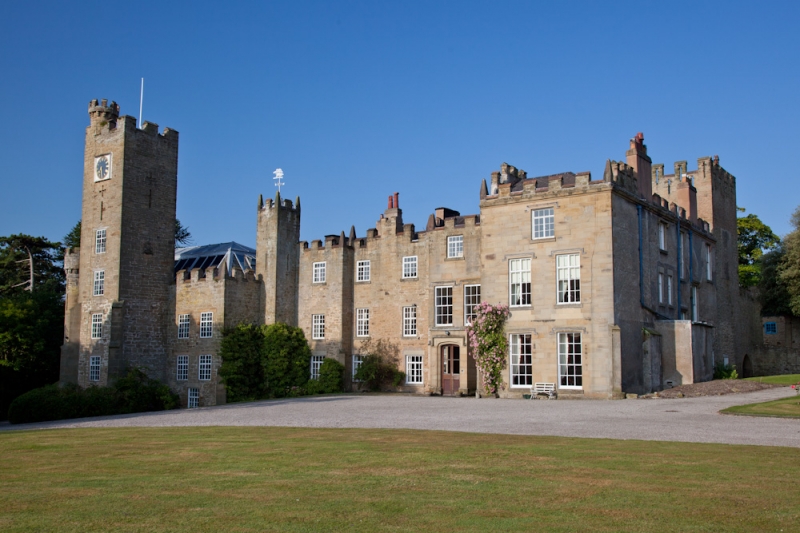 Location: In its own grounds on the E side of Llanasa vilage and reached by drives from Llanasa and on the N side from a minor road between Llanasa and Glanyrafon.

There was a house at Gyrn by the late C17 and in the early C18 it formed part of the estates of the Mostyns of Cilcain. The house was sold to Thomas Hughes of Halkyn in 1750. The present house incorporates features from both the late C17 and C18. The house was subsequently sold to John Douglas, a Holywell cotton manufacturer, who transformed the house into a castellated mansion in the period 1817-24. It is likely that this principally entailed remodelling the earlier house by adding a third storey, and addition of the projecting dining room at the N end and a picture gallery and attached tower at the S end of the house. The present plan of the house is shown on the 1839 Tithe map, the year of Douglas' death. Gyrn Castle was subsequently purchased by Sir Edward Bates, a Liverpool merchant and ship owner. Bates appears to have made only minor alterations to the house but added numerous outbuildings.

A castellated asymmetrical 3-storey country house, mainly of coursed stone and slate roof, with its entrance front facing E. Openings are under stone lintels. Some windows retain original sashes, others are replaced in original openings by small-pane cross windows or T-shaped windows incorporating casements. The 3-window entrance bay is R of centre. It has a coursed stone porch with plain parapet. It has a Tudor-headed doorway with hood mould and double half-lit panelled doors. The side walls have half-lit panels under hoods. The porch is flanked by large sash windows. The middle storey has 3 sash windows and the upper storey has 2 casement windows. Projecting on the R-hand side is the 2-window dining room, with diagonal buttresses in the lower storey, sash windows in the lower storey, casements in the middle storey and to the single upper-storey window. To the L of the entrance bay are 2 bays incorporated from the C17 house, of rubble stone in the lower 2 storeys. The R-hand has 2 windows, the L hand, brought forward, one window, all casements. Next L is a higher square turret with pyramidal roof and weathervane, and a diagonal buttress in the lower storey. The double-height picture gallery, with hipped roof, and clock tower project further forward on the L side of the turret. The ground falls away here, for which reason the gallery incorporates a basement storey. The gallery has 2 casements R of the tower, and a single basement window, while L of the clock tower is a 4-light casement. The 6-stage tower has diagonal buttresses to the lower 2 stages. The lower 4 stages have casements, with a hood mould in the second stage, while above are a narrow vent and arrow loop in the fifth stage, with round-headed window to the rear, and then round clock faces to the front and rear of the upper stage. The embattled parapet has a higher SE turret set behind the parapet, with corbelled battlements.

The L gable end of the picture gallery has higher round angle turrets and a central embattled oriel on a V-shaped wall shaft. The basement has casement windows L and R under linked hoods.

The rear of the gallery has basement openings under stone segmental heads, comprising a panel door with integral 2-light casement to its L, then an embattled wall (with an opening cut through it) screening the service yard from the garden, 2 alternating doors and windows. Further L is the 2-window return (S wall) of the main service wing, the openings of which are offset to the R side, which retains a hornless sash window on the L side of the lower storey, but otherwise replaced casements, and a basement boarded door with flanking windows. The rear of the service wing is embattled, and with scribed roughcast. It has a lean-to on the R side with a gabled dormer, 2 sash windows and a doorway to the L in a covered walkway. Further L is a flat-roofed projection with segmental-headed sash window offset to the R. The upper storeys have casement windows and inserted doorways, incorporating a flat in the upper storey. At the L (N) end of the service rooms is an added 5-stage square tower abutting the rear of the house. This is roughcast in the lower 3 stages and rubble stone to the upper stage. The battlements are pierced with arrow loops. In the lower stages are sash windows facing S to the courtyard, with 2 doorways in projections to the lower stage. The W wall has 2 casements in the lower stage, with single sash windows above.

The R end wall of the house has a projection off the dining room, above which are 2 inserted windows and replaced upper-storey window. Further R are 2 sash windows under hood moulds lighting the stair, with a replaced stair light below the eaves. The service rooms further R have sash windows.

The principal rooms and main stairway are on the R side of the entrance, probably following the general plan of the C18 house, with the gallery on the L side beyond the smaller rooms of the C17 house.

The entrance hall has panelling to the walls said to have been brought by Sir Edward Bates from his house at Beechenhurst, Liverpool, and a Jacobean style panelled ceiling. The fireplace has ornate panelling in Jacobean style continuing across the flanking niches. The rooms on the L side of the entrance retain spine beams retained from the late C17 (and a marble fireplace inserted late C20). The picture gallery is top lit and has a 5-bay roof with moulded arched braces on corbels, and collar beams with queen posts. A flat ceiling in the centre has octagonal panelling. The roof has a moulded cornice. A plain black marble fireplace in the E wall has a wooden surround. The dining room, on the R side of the entrance hall, has a panelled wainscot, and foliage trails to a panelled ceiling (the room above the dining room has a similar plaster ceiling). The Classical doorcases incorporate pilasters and panelled doors. The wooden chimneypiece has double Ionic pilasters and an overmantel with a mirror and round-back niches. The fireplace is placed in the centre of 3 blind arches in the N wall. The stair hall, behind the entrance hall and dining room, has a full-height open-well C18 stair, with turned balusters, 3 per tread, wreathed handrail and moulded tread ends. The quarter-turn service stair, behind the rooms with C17 detail, has plain balusters.

Listed as a C19 country house notable for its castellated style typical of the C19 Picturesque movement, the result of remodelling an earlier house on the site.