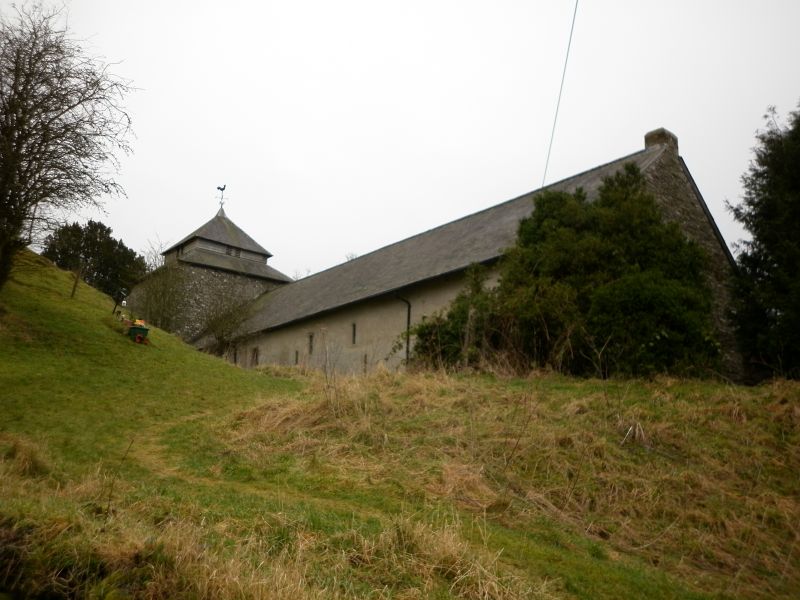 Location: Occupying a steep site in the centre of the village, on the S side of the B4356

The rounded churchyard and Celtic dedication suggest an early foundation. The present church is early C14 with tower added in the C15 or C16. Its unusual position at the E end is accounted for by the fact that the church is built on steep ground and the E side was the most practical and aesthetically the most effective solution. The church was altered in 1752, when the bell stage of the tower was remodelled. Major restoration was undertaken in 1908 by W.D. Caroe and H. Passmore, architects, who rebuilt much of the nave S wall, added the porch and inserted the baptistery. The contractors were Collins & Godfrey of Tewkesbury.

A parish church in a mixture of Gothic styles, on a steep site comprising nave, with crypt and S porch, and chancel under a single roof, and E tower. Walls are rubble stone, partly rendered in the nave S wall and wholly rendered on the N side. The roof is slate with overhanging eaves. The open-fronted rubble-stone S porch has a timber-framed gable with rendered panels. In its E wall is a wall tablet to John Dakins (d 1819). Inside the porch are stone steps to the early C14 nave S doorway, which has a continuous double chamfer to a 2-centred arch. The double doors are of 1908. Fragments of worked masonry have been incorporated into the E and W walls, and part of a stiff-leaf capital has been re-used as a stoup. This masonry is said to have been brought from Cwmhir Abbey.

To the L of the porch is a boarded crypt door with studs and strap hinges, under an elliptical head with continuous hollow-chamfer and broach stops at half height. Above are 2 superimposed windows (the upper lighting the gallery), each square-headed with 2 cinquefoiled lights and sunk spandrels. The wall is recessed immediately to the R, where the porch is placed, and where there is a small pointed window R of the porch, above which is a fragment of re-used masonry. Further R the rendered wall has a pronounced batter, and a 4-light square-headed window with pointed lights and sunk spandrels. At the E end of the nave the elevation is again slightly recessed and has a 2-centred boarded door in a C14 doorway with continuous chamfer (probably a priest's door to the original chancel). The chancel is brought slightly forward with quoins. It has a band of 2 courses of diagonally set stones beneath the eaves to the L of the window. The 5-light S window is similar to the nave 4-light window. To its L is a wall tablet to Richard and Eleanor Davies (d 1807, 1813), signed 'ES'. The E wall of the chancel, to the L of the tower, has 2 wall tablets, a former tablet between them having fallen. The L-hand is to Richard Williams (date weathered), the R-hand badly weathered and indecipherable.

The 2-stage tower is broad and square, with diagonal E buttresses, angle buttress to the SW and square turret to the NW. In the S wall is a boarded door with studs and strap hinges of 1908, under an original 4-centred head recessed beneath a 2-centred arch of rubble voussoirs. A relieving arch is above. The jambs of a former bell-stage window are beneath the eaves. In the E wall is a blocked window with dressed surround to the bell stage. To its L is a stone with inscription only partly legible, reading 'HI, IE, WARDENS, WS, ID, 1786, …'. The 2-tier belfry has weatherboarded sides and 2-light openings, beneath a pyramidal roof with weathervane.

On the N side the nave is stepped at the W end continuous with the NW buttress and W wall, but is otherwise set back and has a 2-light vestry window to the R with cinquefoiled heads similar to the S. Other windows are mainly medieval and comprise 2 narrow pointed lights and a pointed window in a dressed surround. The chancel has 2 pointed windows. The W wall of the nave has diagonal buttresses and lower central buttress, and distinct bands of shale.

Inside the S door are concrete steps up to the level of the nave. Nave and chancel have a roof of 18 narrow bays with arched-brace trusses, mainly of 1908 but reproducing the earlier roof. In the chancel are 4 tiers of windbraces forming quatrefoils, while in the nave are 3½ tiers and every third truss has a tie beam. To the L of the reredos is a segmental-headed doorway to the tower. The tower has springers for a vault, but they have stiff-leaf capitals, and therefore appear to have been re-set here, probably in 1908.

The W gallery is on 2 octagonal posts, has a front of turned balusters, and straight stair with similar balusters. It is dated 'July 7, 1716', with a further inscription 'IH, GI, CH'WARDENS, IC, UNDERTAKERS'. On its N side it projects forward, beneath which is a contemporary schoolroom, now a vestry, with wooden panelling. The restored rood screen has a broad doorway with triangular head, and 8 narrow bays either side with open tracery heads (copied in 1908 from Llananno), above which is a plain beam and brattishing. The dado is panelled but does not correspond to the bay structure above. In the chancel is a communion rail inscribed 'IHCW/EDG/1828', with plain balusters. Re-used pew ends form a wainscot in the N and S chancel walls. In the N nave wall are 3 fragments of wall painting, probably post-Reformation and comprising the frames for inscriptions. The panelled and painted wooden reredos of c1950 is in simple classical style, and has a tall central panel under a tester, with Crucifixion in low relief. Outer panels have shields in low relief, the R-hand representing St Cynllo, and are surmounted by carved angels.

Near the W end of the nave, opposite the entrance, is an ashlar baptistery, with iron gates to stone steps. Allowing full immersion, the unusual presence of such a baptistery in an Anglican church is considered to have been influenced by the strong Baptist tradition in the locality, although it is said to have been used only 3 times in the C20. The font is medieval, with a plain but asymmetrical octagonal bowl, short stem and square base. Pews of 1908 incorporate panels of older box pews, and have panelled ends. The plain panelled pulpit with tester is early C19 (perhaps the same date as the communion rails), and was originally a double-decker pulpit on the S side of the nave. Choir stalls have shaped ends and fronts incorporating open arcading.

Listed grade II* as a largely medieval church with unusual E tower creating an attractive composition on a steep site, and with notable interior features from the C15 to the C19.