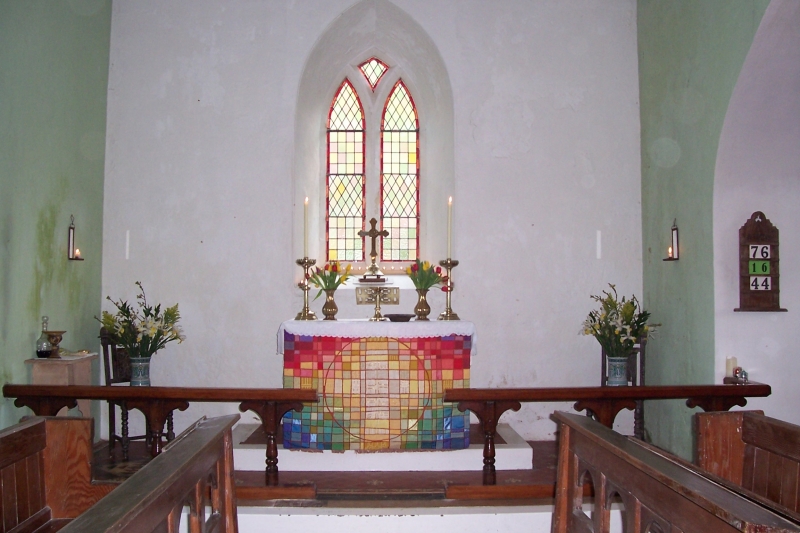 Location: An isolated hilltop church in a walled churchyard, on the E side of a minor road between Brechfa and Llanybydder.

A medieval church first mentioned in the late C13 and a chapel-of-ease in Llanllwni parish. It was a parish church by 1833. The structure is medieval with a late medieval S aisle, although external openings date from a restoration in the early 1850s. Further minor restoration of 1907 was by E V Collier, architect of Carmarthen.

An Early-English style church comprising nave and chancel under a single roof with W bellcote, W porch and a S aisle with chapel shorter than the nave and under a separate roof. Of rubble stone with slate roofs. The openings are all C19, of which the 2-light windows have Y-tracery. The S aisle has a doorway in a projecting hammer-dressed stone surround, with a pointed head and hood mould to a boarded door. To its R are 2 windows with hood moulds. The E walls of aisle and chancel both have similar hooded windows but on the N side of nave and chancel 3 similar windows are without hoods. The gabled porch has a pointed doorway with narrow voussoirs and C20 iron gate. The square-headed W door to the nave has a boarded door. The C19 bellcote has a single bell in a round-headed opening with hammer-dressed voussoirs.

The interior has suspended ceilings obscuring the roof trusses, which are said to be C19. A 3-bay S arcade has simple plastered 2-centred arches. The late medieval plain octagonal font is on a stem but the base is missing. The C18 pulpit has blind Gothic panels with painted sunflowers in relief, on a base of clustered columns. Benches have simple ends. The communion rail has turned wooden uprights with brackets supporting the rail. The sanctuary has plain and encaustic tiles.

Listed as a simple late medieval church on an upland site characteristic of SW and mid Wales, with good interior detail, including font and pulpit.