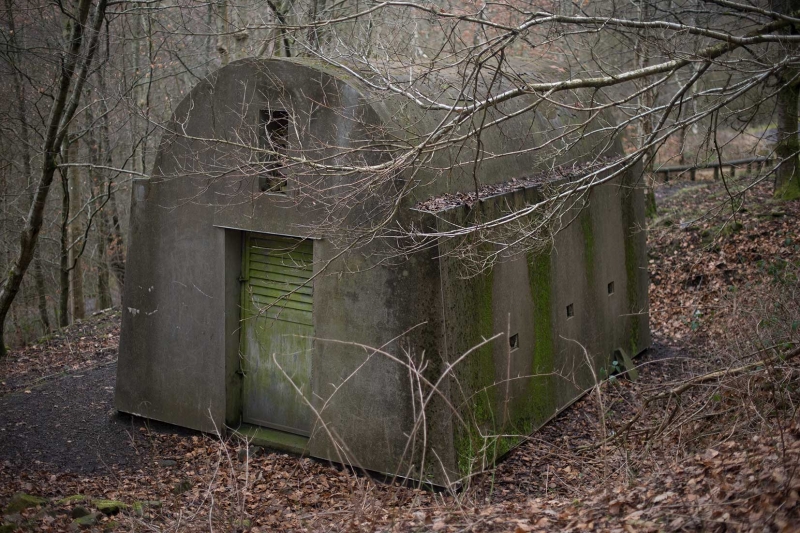 Location: Located on the hillside north of the site of the former Ogilvie Colliery shafts, in the Darran Valley Country Park N of Deri; accessed by a forest track E of the island in the lake.

Ogilvie Colliery was established at the beginning of World War I, when the South Wales Coal industry was at its height. It was owned by the largest of the Welsh Coal combines, the Powell Duffryn Company, which at that time operated some 18 collieries. It was known as producing high-quality coal. Subsequently nationalized, it continued in production until 1975, at which time it employed over 600 men. The explosives store was on the hillside above the colliery to reduce the risks of an explosion. It was typical in form for magazines of this date, being of brick with no internal materials likely to create sparks, a vaulted roof and thick walls. Such magazines were offically licensed by the Secretary of State. Although originally on the open hillside, the building is now within a forestry plantation.

A small brick single-storey building with a vaulted roof two bricks thick, with battered walls tapering from 0.62m thickness at Im above ground level to 0.5 m. The arch springs from a plinth at the wall heads. The structure was rendered to the outside to protect the arch from frost. There is a tall louvred window at a high level at each end, and small square ventilation holes all around with renewed iron gratings. The doorway, at the eastern end, has an iron frame with external hinges to the metal door; louvred above. There are slate-hung timber lintels to the doorway and windows. Render has recently been renewed in cement with stainless steel edgings so no building materials are currently identifiable externally.

Listed as an unusually complete example of a surviving Colliery explosives store.