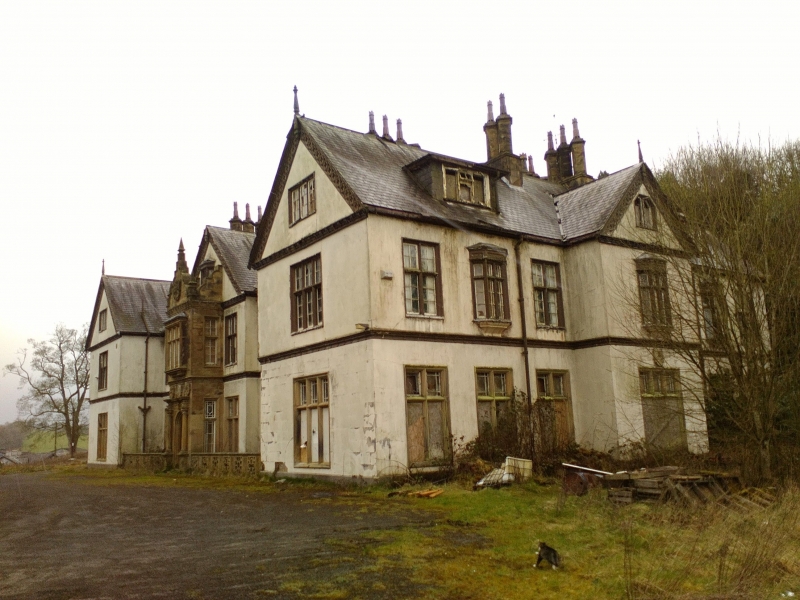 Location: Located at the W boundary of the community, approximately 5km SW of Ruthin; accessed via a long drive running westwards from the road by a lodge.

The site originated as a medieval deer park, one of five belonging to Ruthin Castle. A gentry house has been established here since at least the C16 and in 1617 a Thomas Needham of Pool Park served as High Sheriff of Denbighshire. Thereafter the estate became a possession of the Salesbury family (of Bachymbyd and Rug) and thence passed through marriage to the Bagots of Blithfield in Staffordshire in 1670. The present house and its associated estate buildings were laid out between 1826 and 1829 for the second Lord Bagot to designs by the architect John Buckler, possibly in collaboration with Benjamin Gummow. The Bagots retained the estate for less than a century. By 1919 it was tenanted by Sir Ernest Tate, Bart., the sugar magnate, who served as High Sheriff of the county in that year; within a decade it was sold. In 1937 the house became a convalescent home and subsequently a psychiatric hospital; it is currently (1998) empty. Neo-Elizabethan in style, and originally with mock half-timbering to the upper storey, Pool Park represents a very early and accomplished example of this revival style.

Large country house in Neo-Elizabethan style. Of two storeys plus attics, with slate roofs. Chimneys, porch, and ground floor dressings in golden sandstone. The main front is symmetrical and has a shallow E-plan. It has a moulded eaves course and string course between the first and ground floors. Three large gables with pierced quatrefoil decoration to the bargeboards. The central block has four groups of stone chimneys, each with 5 diagonally-set stacks and gabled dormers flanking the large central gable; this has a small attic oriel and a surmounting weathervane. Central 'frontispiece' porch in late C16 style, with pinnacled, shaped gable and a central heraldic shield to the gable apex; 3-light mullioned and transomed oriel window to first floor (narrow transomed window to returns on each floor). Round-headed doorway flanked by fluted columns on decorated plinths; shallow entablature above with 3 heraldic shields and lozenges in between. The ground-floor return windows to the porch have stained glass panels to the upper lights (depicting the Salesbury arms). Mullioned and transomed windows flank the porch on each floor. To each side of the central bay is a recessed bay of two mullioned and transomed windows. Each outer advanced gabled bay has a 3-light small-pane casement window to the attic floor and a 3-light mullioned and transomed window to each of the first and ground floors, those to the latter slightly taller. Low stone screen between the projecting gables, with alternating panels of strapwork and fretwork.

The R return (facing the former main drive) has two chimneys across its ridge with diagonally-set stacks. Seven windows; central advanced gabled bay with pierced quatrefoil bargeboards, and small-pane casement window; flat-roofed dormer to each side of the gable. The first floor of the gabled bay has an oriel; the ground floor has a 3-light mullioned and transomed window (the central light a doorway) with stone steps below. To each side of the centre are 3 bays with, on the first floor, a central oriel window flanked by a 2-light mullioned and transomed window; the ground floor has three 2-light mullioned and transomed windows. The L return of the main front (facing the former service entrance) has plainer treatment; three-window gabled bay with service blocks partially obscured by flat-roofed extension and fire escapes. The fire escapes link to a one-and-a-half storey block in brick; slate roof with finials to gable ends. This has 2 large gabled dormers with finials and 3-light windows (diamond panes to outer lights); two 2-light mullioned and-transomed windows to the ground floor. The front face of this block has a sandstone dedication plaque to the ground floor inscribed: 'This stone was laid by the Rt. Hon. William, Lord Bagot on the 4th day of July 1827'.

Square entrance hall with full height wooden panelling in Jacobethan style. Inscription behind front wall, to each side of door, 'William Second Lord Bagot Built This House. Begun AD 1826. Finished AD 1829'. Fireplace to L. Opposite the entrance is a round arched doorway with cherub heads to the spandrels and double-leaf panelled doors.

Staircase bay with central segmental arch flanked by round arches; enriched wooden pillars and panelled walls. Grand wooden staircase (perhaps remodelled in the early C20). This has a pair of three-quarter angels as newels and paired vase balusters. The lower flight has panels depicting cherubs in combat with sea-monsters, whilst the upper flights have Biblical scenes alternating with strapwork panels; the landing balusters are enriched with allegorical figures. Half-landing with large three-light window. The ground floor has a transverse corridor with oak panelling approximately 1.6m high. The rooms to the L on the front have largely lost their detailing as a result of conversion to hospital use. Other rooms include, to R of front, the former library (recessed bookshelves and strapwork fireplace) and two sitting rooms with wooden fireplaces. To the rear is a former theatre room with a small recessed stage which connects with dressing room.

Listed Grade II* as an early and largely unaltered example of Jacobethan revival style, and for its particularly fine staircase.