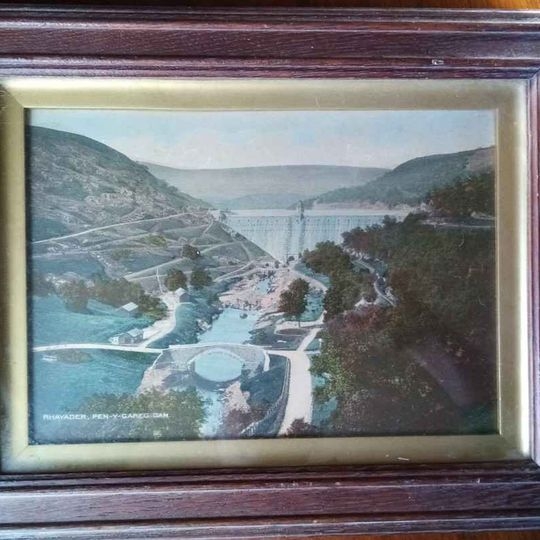 Part of the Elan Valley reservoir scheme built by City of Birmingham 1893 to 1904. Engineer James
Mansergh. The scheme was amongst the greatest civic achievements of the late C19. The Corporation of
Birmingham employed direct labour for the scheme which involved the construction of 53 km of railway
to transport materials from the Wye Valley line at Rhayader, 4 dams, an aqueduct 126 km long, and a
village for construction workers. The height of the reservoirs enabled water to reach the outskirts of
Birmingham by gravity alone, without the expense of pumping. Provision was made for future expansion
in the Claerwen Valley where the scheme was brought to its current state by the Claerwen dam in 1952. The viaduct resting on top of the submerged dam is the key to the water supply scheme, allowing water to always be available at adjacent Foel Valve valve tower.

Stone plaque at SE end records :-
"This stone was laid by Alderman Charles Gabriel Beale, Lord Mayor of Birmingham, in the presence of
the members of the City Council, on the 19th day of June, 1900".

Graded II* for its special historic and architectural interest as an integral part of one of the greatest engineering achievements of the C19 and for group value with other listed structures associated with the Elan Valley Reservoir scheme.