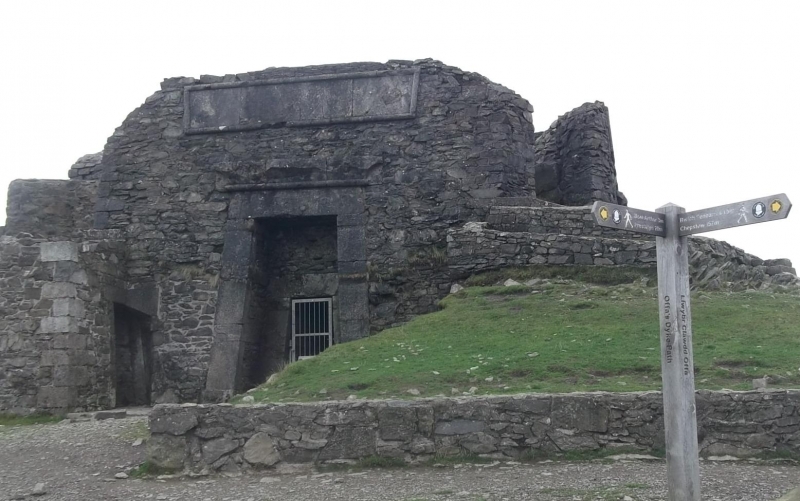 Location: Situated on the Community Council boundary at the top of Moel Fammau, the highest point in the Clwydian Hills. Reached from a track running N off a by road running between Tafarn-y- Gelyn and Llanbed

Built 1810-1812, by a subscription raised from the County gentry to commemorate George III's Golden Jubilee in 1810. Designed by Thomas Harrison, architect of Chester, in the Egyptian Revival style following his earlier Gothic designs for the monument. Completion was delayed because of lack of funds and disagreements between Harrison and the contractor, Thomas Penson of Wrexham, who refused to finish the monument. The original design had 3 diminishing stages, the top one an obelisk and the lowest a battered podium, with a blank doorway on each face and square cut corner bastions. The tower had to be partly rebuilt after a collapse in 1851 and in 1862 it was severely damaged in a storm and only the base survives. It was consolidated in 1970 when a viewing platform was incorporated.

Base of once tall monument of uncoursed rubble construction, plan form roughly circular with the remains of the corner bastions. Two large blank Egyptian style doorways with blank plaques above. Top now used as viewing platform.

Listed as the remains of an unusual and important example of Egyptian Revival architecture by Thomas Harrison and as a prominent local landmark.