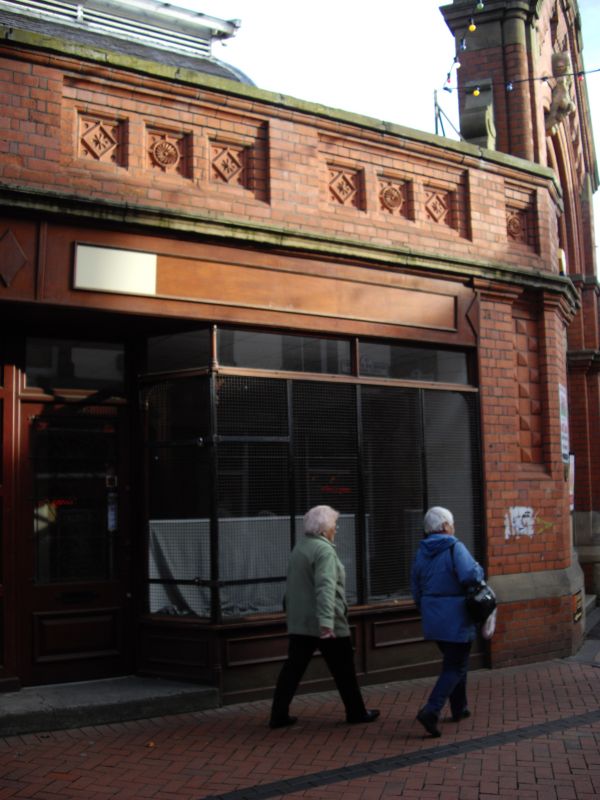 Dated 1879, and built on the site of Manchester Square, which had previously been used as an open market by visiting tradesmen during annual fairs.

The building comprises top-lit market hall and a row of 6 shops along its W elevation to Henblas Street, and Public Conveniences in the SE corner. Entrance to market hall across SW corner and towards NW. Single storey screen walls of red Ruabon brick with ashlar dressings and terracotta enrichment, and parabolic slate roof with continuous glazed clerestory, ornately traceried in its N facing gable. Main entrance at SW, facing the Butcher's Market across the street. Scrolled ironwork screens in double gates beneath shouldered lintel with 'General Market' in raised letters, set in high segmental archway on stepped pilasters, with dated panel set in patterned terracotta tympanum. This is surmounted by a truncated stone coped gable with ornate terracotta corbelling and volutes to parapet. From this angled entrance, screen walls run E and N: Short E return houses Public Conveniences, with advanced entrance to right, second arched doorway to centre, and small windows recessed with raking sills and stone lintels. Longer N range houses shops: some original detail survives in the shop fronts, which have recessed doorways and iron framed windows with slender bracketted corner posts and upper margin lights. Fascias were incorporated in iron framing, but the detail has been largely renewed. Brick pilasters at outer angles, carrying stone cornice which continues over the shop fronts and is surmounted by a parapet with inset terracotta panels. Second entrance to market hall is towards the N, and like the main entrance has scrolled screens to paired iron gates, with flat stone lintel beneath raised panelled parapet. A further shop, detailed as the others, occupies the NW corner of the site. Blind elevations to E and N.