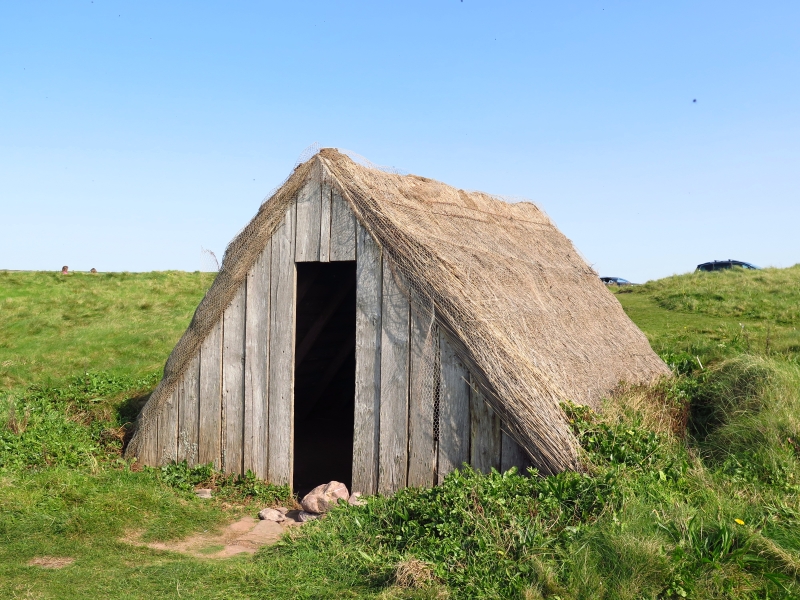 History: Seaweed (red porphyra) gathering at Freshwater West Bay for the production of laver bread became organised by speculators from Swansea as a regular trade in 1879, employing women from the village of Angle. The drying huts were set up by their menfolk. By the early C20 there were 20 huts in the vicinity used for storing and drying the seaweed prior to its despatch to Pembroke and Swansea. The trade died out c.1940.

The one surviving specimen is that of Audrey Hicks. It appears to date from before 1906. It is rather smaller than some others illustrated in Country Life in 1967, which were about twice as long.

According to a survey in 1975 when the hut survived in ruinous condition, it then consisted of only four pairs of rafters, all but one of which had a small collar near the apex. Planking only survived on the E side. Traces of reed-thatch were observed. There is mention elsewhere of marram grass being used as a thatch.

In 1978 the hut was rescued by Pembroke Borough Junior Civic Trust. It is now in the ownership of the National Trust and in the care of the Pembrokeshire Coast National Park.

Description: The hut is approximately 3.3 m wide by 4.5 m long, and stands on a levelled platform cut into the turf. Six rafters each side rest on a base of stones set in the ground, and are crossed and nailed at the apex. There is no ridge piece. The rafters are boarded horizontally with 5 cm gaps and reed-thatched. Turf is laid at the apex. There is vertical boarding at each gable. The floor is sand upon which the seaweed would be laid to dry. The door is missing.

Listed as evidence of an important local cottage trade in the gathering of a natural foodstuff, probably following an ancient tradition. Although much restored, the hut is a fine specimen of unsophisticated methods of construction.