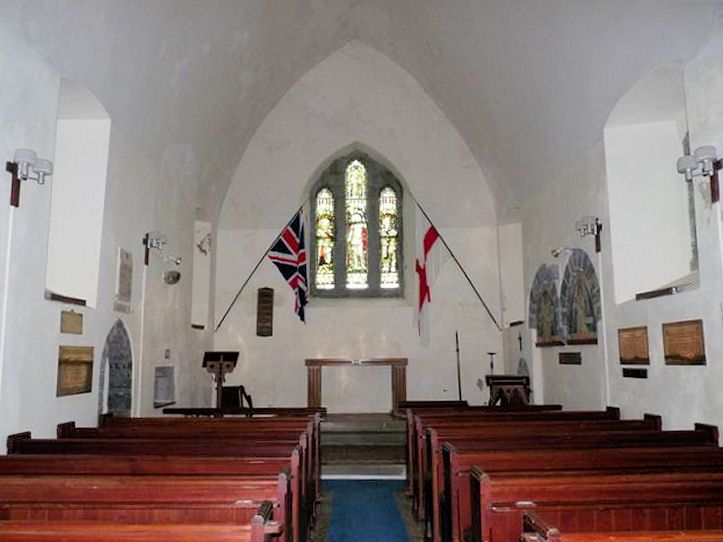 History: The chapel is perhaps associated with Monkton Priory. There is a mediaeval nave and chancel with a minuscule room at the N. In 1787 the tenant of Flimston farm converted the building into a carpenter's shop, stone shed and granary, forming cart-entrance arches which are still visible in the E wall and inserting internal walls. The little north room was reused as an external staircase. The building was restored to serve as a chapel again in 1901-3 by Col. and Lady Lambton, in memory of their three sons. Although protected by its position on the Army Range since 1938, it fell into disuse after the 1939-45 war. It was restored again in 1963 by the staff of the Royal Armoured Corps.

Description: The mediaeval chapel is a large single-cell building with a steeply-pointed vault. Rubble limestone masonry with larger quoins. Tile roof with verge parapets. Blocked S door. Interior: Arches of two cedilla are visible, blocked. The small side room at the N is now a vestry. It has a low door and a restored barred window to the altar. The semicircular bell-rope shaft in the centre of the W wall internally is not original, as it blocks an earlier window, but it predates the farm-use phase.

When restored by the Lambtons the building was rededicated to St Martin. An entrance porch added at the N. Small finial crosses at the E end and over the porch. E window of three lancets, following the arch and outline of the original windows. W bell-turret with openings on all four sides. Corbelled cornice. Plain and glazed floor tiles were laid in a pattern in the sanctuary. Movable altar rails. Modern font on a square shaft.