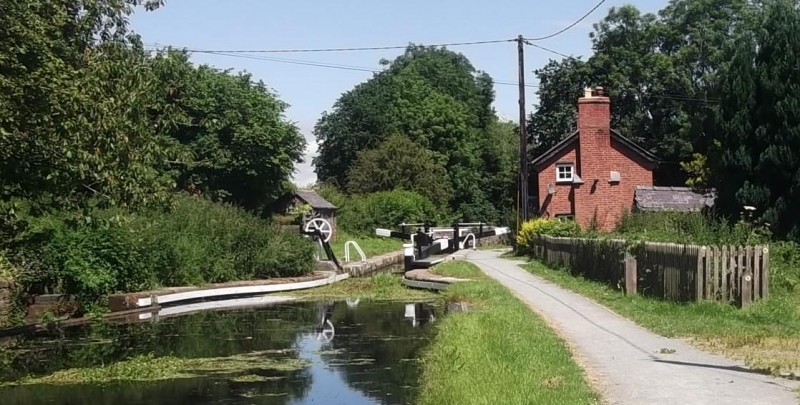 Location: Immediately S of the lane leading to Dyers Hall Farm, close to the A483 S of Pool Quay Church.

The Eastern Branch of the Montgomeryshire Canal was built between 1794 and 1797, engineered by John and Thomas Dadford. Subsequent work on the canal included an extensive programme carried out by the Shropshire Union Canal and Railway Company in the 1880's and 1890's, and it is likely that the lock, while part of the original engineering of the canal, was substantially rebuilt or repaired at that time.

Brick-lined lock chamber, with stone copings. Timber gates, replaced in the 1980's. Cast-iron lock ground-sluice controls, probably introduced by G W Buck, Montgomeryshire Canal Eastern Branch Engineer between 1819 and 1831. Brick retaining wall to platform above the falling tow-path to the NE of the lock, and retaining wall to the high W bank, linking the lock chamber with bridge No. 111 immediately to the N. Small brick hut on the W side of the lock.

A significant component in the engineering of the canal, which also forms part of a group of structures relating to the canal at Pool Quay.