A Grade I Listed Building in Cilycwm, Carmarthenshire 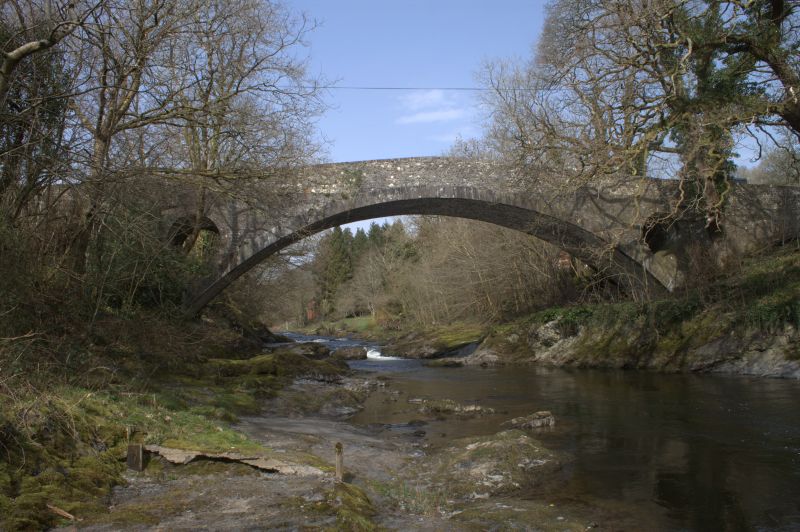 Location: Situated some 1.5km of Llandovery, carrying road to Cilycwm and Porthrhyd across River Tywi.

Road bridge across the Tywi, built in 1773 by Thomas Edwards, and one of the outstanding surviving works of the bridge-building Edwards family of Pontypridd. This bridge has the weight-reducing pierced spandrels that Thomas' father the Rev William Edwards introduced at Pontypridd in 1756, one of the very few post-Roman advances in masonry bridge building. This is perhaps one of the most elegant of the surviving Edwards bridges, the very broad elliptical arch rising to a thin crown. Although marked 'Thomas Edward 1773', the bridge was attributed by Thomas Rees writing in 1815 and Samuel Lewis in 1833 to William Edwards, and A Arber-Cooke records that it has also been dated 1785.

Road bridge, rubble stone single arch of some 25m span and 3.6m width rising high above the Tywi from natural rock abutments. The single broad elliptical arch has large cut stone voussoirs, and the spandrels have masonry in very thin courses and are pierced with large circular holes also with cut stone voussoirs. The abutments are stepped out slightly and splayed. Humped roadway with ramped parapets of rather cruder masonry than the bridge, with stone slab coping stones. In centre of S parapet a slate coping stone marked 'Thomas Edward 1773'.

Included at Grade I as an outstanding example of the revolutionary bridge designs evolved by the Rev. William Edwards and his sons in the later C18.