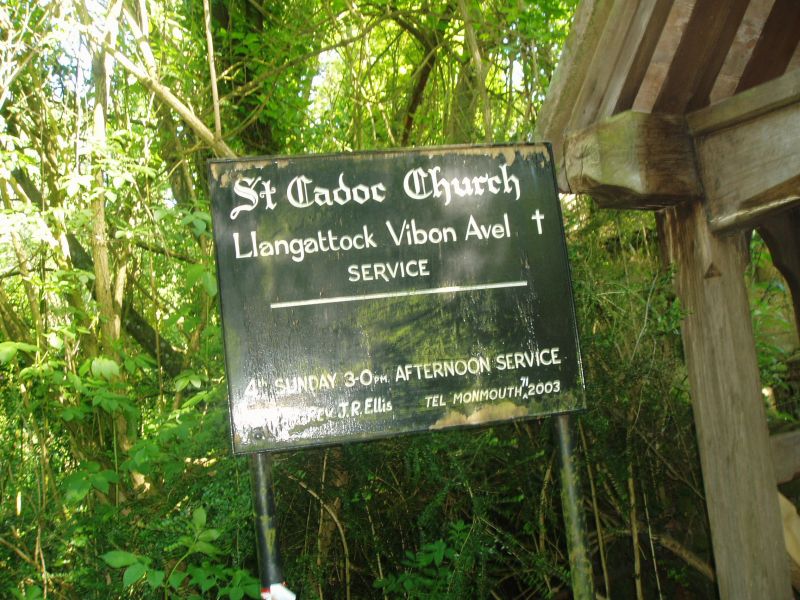 Location: Approximately 1km N of The Hendre; and, apart from the close proximity of Llangattock Manor and Llangattock Farm, in an isolated position approximately 300m west of the lane between Hendre and Newcast

The medieval church of St Cadoc, consisting of tower, nave and chancel, was restored and redecorated in 1866 by Messrs Cox & Son of London, at the expense of John Etherington Rolls of The Hendre. In 1875 a N aisle was added, the chancel was slightly extended with a porch added to its S side and an organ chamber to its N side, and the interior was slightly remodelled, to the designs of T.H.Wyatt. The tower is medieval, but it is not clear how much of the fabric of the restored nave and chancel might also be medieval.

Apart from the tower, this is a small church of low proportions, consisting of a 3-bay nave with a N aisle under a carried-down roof, a 3-bay chancel with a small 1-bay transept and a priest's porch in the E angle, built of sandstone rubble with red tiled roofs in a mixed Decorated/Perpendicular style. The tower, incorporating the porch, is on the S side close to the W end. It is square on plan, internally of 4 stages but externally sheer and plain, with a tiled pyramidal roof bearing a weathervane finial. The S doorway, of red sandstone, has chamfered reveals and a double-chamfered 2-centred arch. Above it is a C15 mullioned window of 3 depressed-arched lights with roll-moulding to the mullions and the heads, and hollow spandrels, and on the E side at this level is a small 1-light window of similar character. The only other openings are a very small 2-light mullioned window in the centre of the W, S and E sides of the top stage, and a pair of low oblong belfry openings in all four sides immediately under the oversailing eaves of the roof. The W end of the nave has a 4-light window with Perpendicular tracery (renewed by Wyatt) and the adjoining end of the aisle has a 2-light window with Y-tracery. On the S side the E bay of the nave has a Perpendicular-style window of 3 cusped ogee lights with tracery. The chancel, which is slightly lower than the nave, has a low transept with a 4-light window mimicking the style of the 3-light window of the tower, and above this a small square window containing a recessed cusped quatrefoil; in the angle to the right, a 3-sided flat-roofed porch which has a 2-centred arched doorway with a hoodmould, a moulded band and a parapet with ridged coping; and to the right of this, a square-headed window of 2 cusped lights. Its gable has a traceried 3-light Perpendicular E window with a hoodmould. The aisle on the N side has sturdy buttresses with offsets, and a small window of 2 cusped lights in each bay.

Dignified and solid, with much use of Bath stone and some veined white marble. The nave has a 3-bay aisle arcade of octagonal columns with moulded caps and broad moulded 2-centred arches; a roof of arch-braced collar trusses carried on wall corbels, with curved Y-struts from kingposts to principals; and a painted lettered frieze below the moulded wall-plate of each bay. Its W window has stained glass by C.E.Kempe, 1879. At its E end is a generously-proportioned and heavily-moulded chancel arch with hoodmould, partly closed by dado-height "screen" walls of veined alabaster in Renaissance style, between which 3 steps rise into the chancel, which has a wooden wagon roof with Tudor-style moulded ribs and carved bosses. The altar is raised up 4 steps (with painted biblical texts on the risers), and has delicately arched and foliated communion rail of wrought-iron, and a carved alabaster reredos inlaid with brass. The E window has stained glass of the crucifixion with the three Marys, by Lavers and Barraud. A large 2-centred arch in the N wall contains the organ, its case of painted pipes corbelled out across the top of the arch. On the N wall next to the vestry door is a brass plate commemorating that the church was "restored by John Allan Rolls of The Hendre in 1875 in affectionate remembrance of his Father John Etherington Welch Rolls, who died 7th May 1870". There are also various wall monuments (from the earlier church) commemorating members of the Evans family in the C17 and C18, and other members of the Rolls family from c.1794.

Included as a fine High Victorian rural church with a good interior, and retaining a C15 tower; and also of special interest for its association with the Rolls family of The Hendre.