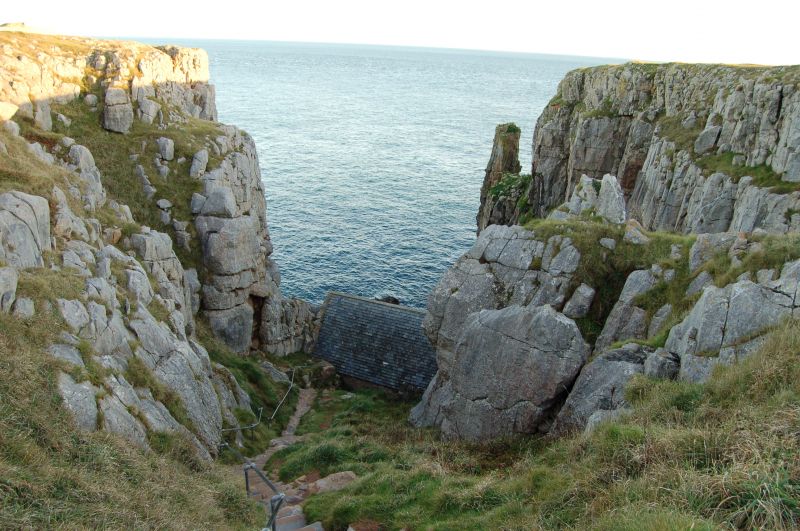 Location: Below the sea-cliffs, 1 km W of St Govan's Head. Reached by a private road across the army RAC Range East. Access sometimes restricted. Services are still occasionally held in the chapel.

Early mediaeval chapel built across a gap in the cliffs at the rock cleft where St Gobhan (Abbot of Dairinis, Co. Wexford, d.586) was believed to have hidden and been miraculously saved from pirates. The chapel and its well gained a reputation for the miraculous cure of lameness and eye-disease. They were described as 'famous' in the C 17.

Single cell with a steeply pointed vault, 5.3 m by 3.8 m and about 5 m high. Aligned with its altar-end slightly N of E.

Limestone masonry in large blocks, roughly brought to courses, built directly off the rock. Part of the W wall is formed of the natural rock. S wall slightly battered at base. Modern pointed slate roof between slight verge parapets and with tile ridge. Empty bell-turret at W. The N entrance has an equilateral pointed arch. The entrance in the W wall has a segmentally curved lintel. Early or original small windows near the apex of the W and E gables with possible marks of bars. Another small window just above altar level in the S wall. A later large window has been formed in the S wall (it is already present at the time of Campbell's 1757 engraving). Also informal retaining-walls beside entrances and a long flight of steps down from the clifftop and others down further to the well.

A third doorway leading to the rock-cleft is situated at the left of the altar at the top of a flight of six steps. This has its dressed lintel and jambs on the inside face of . e wall, suggesting the rock-cleft area was not regarded as external to the chapel but as a room integral to it and perhaps roofed over.

Plastered walls and vault. Altar of rubble masonry with slightly projecting top formed of several pieces of stone. Although these top stones are very worn, they are perhaps only the masonry beneath a lost altar slab. No marks of consecration visible. Low benches against the N and S sides, the S one returning to abut the side of the altar. Rough stone floor which must be recent, as the floor was described in 1925 as clay. A line in the floor close to the altar may be a former step. Piscina in S wall at right of altar. Recess in wall beside N entrance.

Listed Grade I as an important mediaeval pilgrimage chapel which continued to be frequented for miraculous cures down to the C 19.