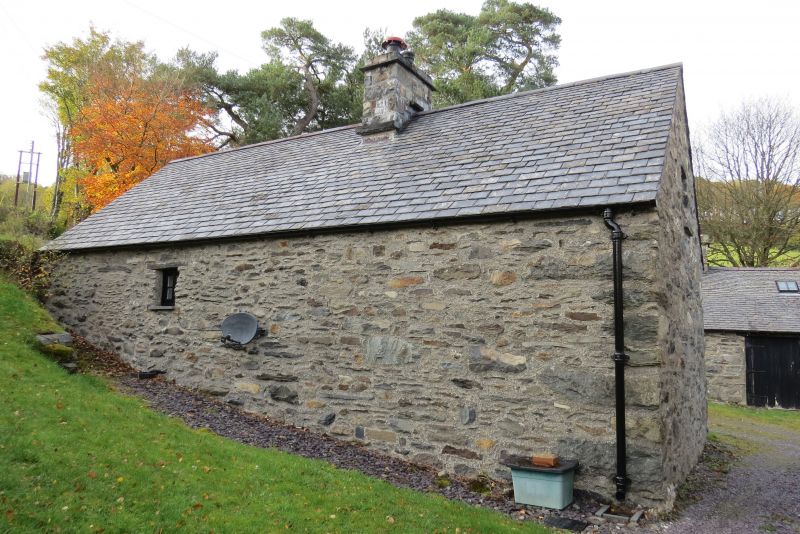 Location: Set into a slight slope immediately S of the village crossroads, adjacent to the former corn mill.

Single-storey vernacular building probably of C17 or C18 and of domestic origin (suggested by a central stack said to be visible internally); altered C19 and C20. The building was used in this century at least as a wheelwright's workshop, most recently (pre-War) by 'Griffith Owen, Wheelwright', as witnessed by a painted shutter still in situ.

Single-storey vernacular building of random rubble construction, with C20 corrugated iron roof. The main (NW-facing) side has a boarded door to the L with a chamfered pine frame and exposed composite lintel (later). To the R a square window opening with modern boarding, formerly an entrance. Beyond, a larger window with painted shutter bearing the inscription: 'Griffith Owen Wheelwright', early C20. To the R of this a further entrance with recessed boarded door. The rear has a small, square light (apparently a primary opening) with modern shutter; to the R a blocked entrance. Upper square, boarded window to the down-hill gable end with pegged frame and lintel.

Retains a central chimney (the stacks removed at ridge level). Not available for inspection during survey (November 1996).

Included for group value with other listed items at the village crossroads.