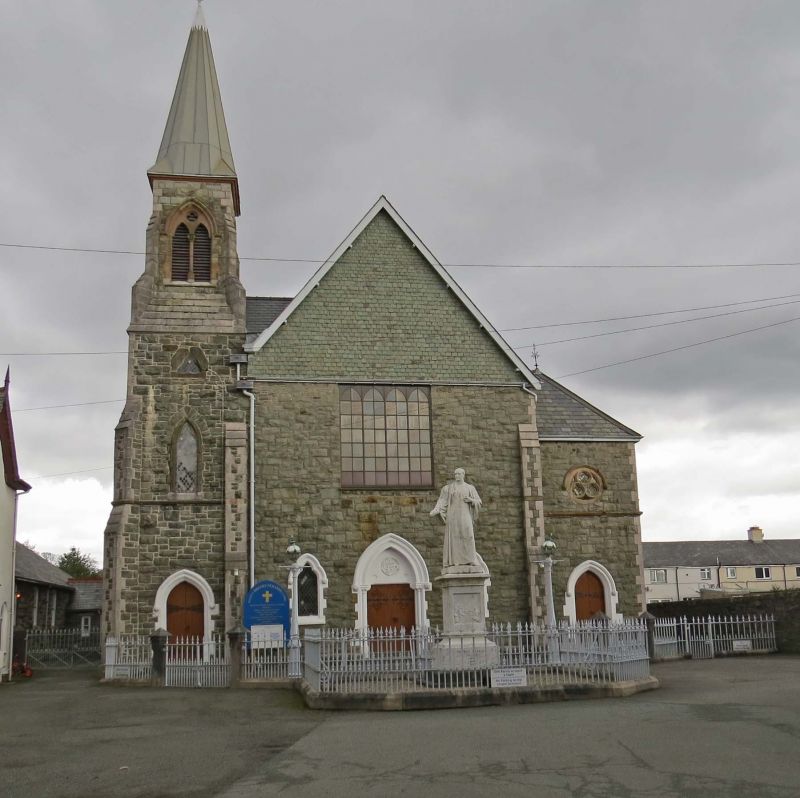 Location: On NE side of square defined by chapel and buildings associated with its history.

Chapel of 1865-67. By W H Spaull, architect, of Oswestry, replacing chapel of 1809, itself a rebuilding of chapel of 1757. The house on the NW corner of the square was the original home of the Bala College which moved to its new site in 1867. The earlier chapels, college, and open ground to SE of chapel (where open-air meetings were held) formed an important group in the history of Nonconformism in Wales. The 1875 chapel seats 1000 (town's population at time of building 1500), and cost £4000. The building's resemblance to buildings of the established church, especially the spire, caused resentment amongst some chapel members who saw the subsequent lean of the tower as divine retribution. The spire was, in fact, removed in 2000.

Gothic chapel. Of green/grey rough-dresed, snecked stone, with sandstone dressings and slate roofs. Entrance front faces square; (later) slate-hung gable, with 4-light upper window. Gothic entrance below with pointed-arched doorway having applied shafts and naturalistic foliage capitals; moulded label with foliated stops. Relief roundel in tympanum; boarded doors with simple Gothic ironwork. Flanking trefoil windows and shallow stepped buttresses to ends. To the L of the front is a truncated tower formerly with stone spire; cusped triangular window above lancet; ground floor doorway, diagonal buttress. The spire has been removed since the last inspection (1997) and has been given a modern slated gable. To R of front, set back, is a stair block with a round window above a Gothic doorway; 2-light window with plate-tracery to R return. Side elevations have five 2-light windows at 2 levels, with plain metal-framed windows; vestries to rear. Spherical-triangle window at rear gable apex. The forecourt at the entrance has 2 sets of stone gatepiers, and iron gates and railings with spear finials.

Listed as ambitious Gothic chapel making prominent contribution to an historically and architecturally important square within the Bala conservation area.