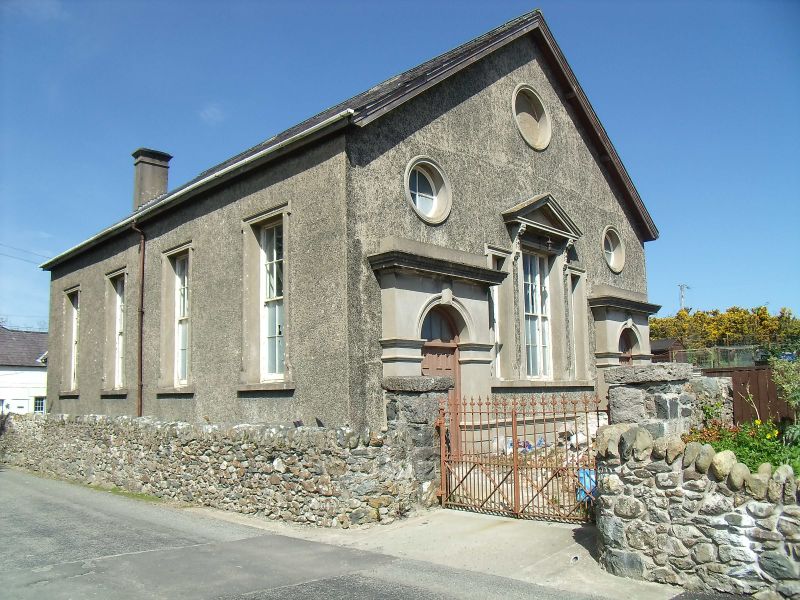 Location: Located at the centre of the hamlet of Caerhun, on the NE angle of the crossroad with Glasinfryn Road.

Built 1895 to serve the Calvinistic Methodist community in this small hamlet.

The large chapel is aligned to the Glasinfryn road, with the facade facing E away from the village. Rendered, with a slate roof. The E front is symmetrical, with central tripartite 20-pane sash window with rendered architrave, and triangular pediment on scrolled consoles, flanked by one narrow tall light each side. Round-headed doors to the outer sides, set forward within a classical type corniced arch, the door panelled with an overlight. Above each door a glazed oculus and a similar but blind roundel in the tympanum of the gable. The side elevations are of 4 bays; similar 12-pane sash windows within a shouldered architraved frame. At the NW end a narrower and lower section, forming the lobby and schoolroom, with a window facing the main street having a segmental pediment on brackets enriched with acanthus leaves. Two metal roof ventilators.

Entrance doors lead to triangular lobbies, which form a five-sided end opposite the pulpit at the SW end. Partly glazed panelled doors lead to the main body of the chapel, which is slightly raked at the rear, and has 59 pews. Coved and panelled ceiling with central perforated ventilator. Walls plastered above the high boarded dado, and a painted architrave. The pulpit is reached by steps, with turned newels to a handrail, and is elevated in front of an architraved round-headed recess. Behind, a panelled pine reredos with shaped top. Set fawr is enclosed.

Included as an unusually large scale village chapel, with handsome and informed detailing.