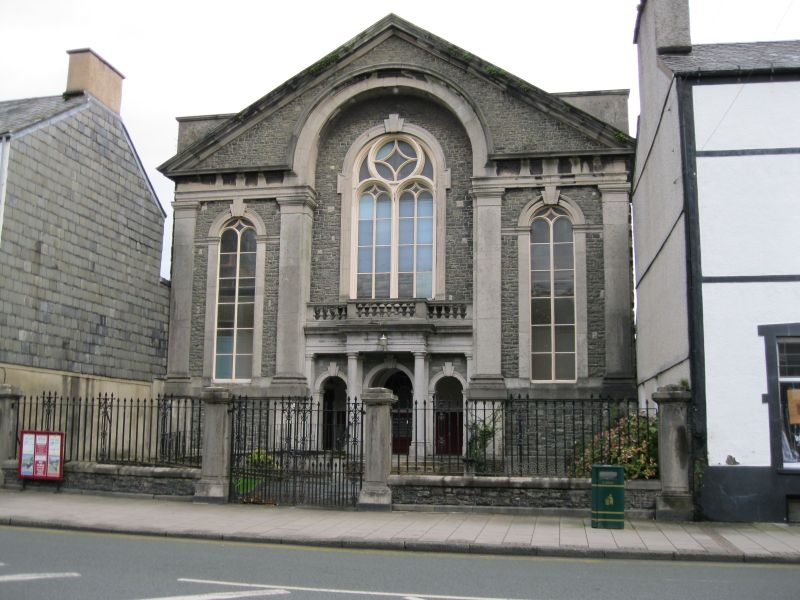 Location: Near the junction with Snowdon Street, set back from High Street in a railed forecourt.

A plaque in porch records that a chapel was originally built on the site in 1827 and was enlarged in 1841. It was rebuilt in 1860 by the chapel architect Reverend Thomas Thomas (Thomas Glandwr) of Landore, Swansea. The chapel features Thomas' trademark motif, the central giant arch breaking through the pediment (derived ultimately from Renaissance facades, possibly by way of Wren's Greenwich Hospital and St Paul's Cathedral). The forecourt gate piers are contemporary with the chapel. The railings are C20, and different from the railings shown in a photograph of the chapel c1904.

A classical style chapel of snecked rubble stone with grey freestone dressings, on a rusticated plinth, and slate roof. The 3-bay gable-end front has a giant arch and pediment characteristic of Thomas. Tuscan pilasters are on high bases to sill level. The outer bays have 2-light windows with tripartite key stones to round heads, and moulded impost bands. The wider central bay has a recessed porch with 3 round-headed arches with tripartite keys, of which the central arch is wider and higher and has 2 detached Tuscan columns carrying the projecting balcony above. Inside the porch is a boarded wainscot and a round-headed window. In its return walls are double doors with round-headed panels and segmental-headed radial-glazed overlights. The balcony has an open balustrade. Above it is the large gallery window, which has 2 main lights under a round large tracery light, in an eared architrave with tripartite keystone.

The 5-window side walls, of coursed local slate-stone rubble, and have round-headed 2-light gallery windows. On the R side is an attached Sunday school facing Snowdon Street, of roughcast painted light blue, slate roof, and ball finial over the R-hand gable. It has 4 round-headed 2-light windows. In its R gable end is the entrance, in a lower gabled porch with panelled door facing the road, which has an opening boarded up on its R side. The gable end of the school has 2-light windows flanking the porch and an oculus in the gable. At the rear the school has been extended to form a shallow lean-to against the rear of the chapel. The chapel gable end has a round-headed louvered vent in the gable.

The main chapel has a flat panelled and boarded ceiling with large ceiling rose, and a cornice at the impost level of the windows. A 3-sided gallery is on classicising cast-iron columns, has a panelled wooden frontal on a dentil cornice, and steeply-tiered pews with doors. At the entrance end of the gallery is an organ (by Bridley and Foster of 1884). The wooden pulpit and panelled set fawr are later C19 alterations. The pulpit has a bowed frontal with relief panels, turned newels and balusters to the stairs. Behind the pulpit is a shallow arched recess with Corinthian half-columns and fleur-de-lys decoration. Panelled pews with doors are in 3 ranks, of which the outer are parallel with the walls.

Listed for its special architectural interest as a fine mid C19 chapel by one of the foremost chapel architects in Wales, in a prominent position in the town centre.