Church of the Holy Spirit 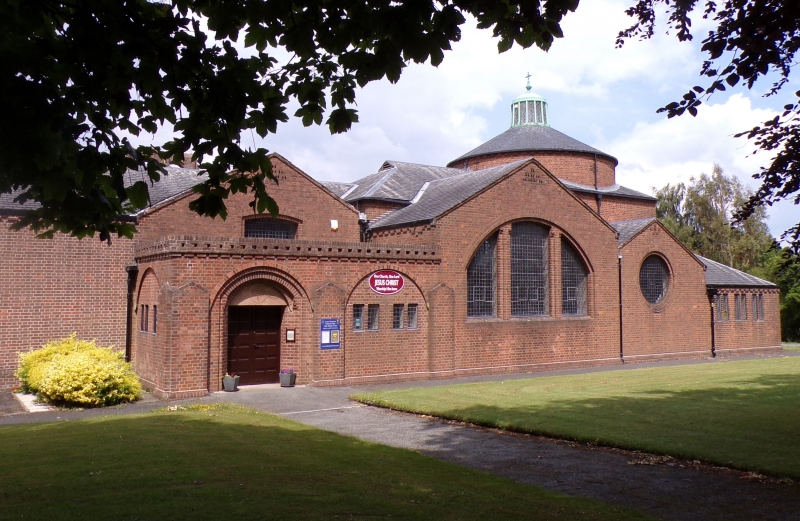 Location: Set back on the east side of the road at the crest of Aston Hill.

Foundation stones record the construction of the church in memory of Henry Neville, Baron Gladstone of Hawarden, in 1937-8. The architect was H S Goodhart-Rendel, nephew to Lady Gladstone; W F Humphreys Ltd were the builders. The church represented a new foundation to serve the growing communities of Ewloe and Aston.

Parish church, the style Byzantine in inspiration, with high articulation given to plan areas. Brick-faced (over concrete construction), with Penrhyn slate roofs. Long nave, windowless except for a large semi-circular tripartite west window. Its line is broken to the S by a gable aligned with the single storeyed entrance block in angle of nave and S transept. This entrance is arcaded between vestigial pilaster buttresses: the entrance has paired panelled doors set back in complex brick arch; simpler arches with paired small windows to its right and in the W return wall. Pierced parapet, echoing the detail of the cornices which are continuous elsewhere. Central roofline stepped up over central space (suggesting a crossing), hipped to the higher roof over the long chancel. This roof itself is interrupted by a circular drum, surmounted by copper lantern. S transept has broad tripartite semi-circular window, and there is a lower asymmetrical gable to its east with circular window. Vestries are expressed as a hipped roofed lean-to wrapped around the east end of the church. Similar lean-to to N of chancel (which has high level window in this elevation), houses boiler house, which abuts the curved wall of the N transept aisle, clasped against the long projection of the N transept itself; bellcote projects over rose window. Nave roof sweeps down over lean-to aisle to NW (in fact internal porch and vestries), with paired double doors and 4 paired windows with simple undetailed mullions.

Simple interior finish of considerable subtlety. Smooth concrete vaulting throughout, sprung from a low point to eliminate the need for external buttresses: the simple semi-circular tunnel vault of the nave broken as a smooth quadripartite vault to define a vestigial crossing: this space opens out to form a transeptual organ chamber to the N, with a curved aisle to its E; to the S a narrow entrance arch and high tripartite window are offset in the corresponding space. Beyond this, the S aisle is stepped in height, delineating entrance 'narthex', then side chapel in its easternmost bay. Tunnel vault resumed over chancel where it is pierced and top-lit from the dome. Deceptively simple buff and red block flooring in fact laid to variable patterns defining the different liturgical areas of the interior; stone flag floor to chancel. Simple fittings include wood rails to altar, and stone reredos; parallel lines of lamp standards define a central aisle (there are no fixed benches), and there is a corona of lights to the chancel. Other original joinery includes fine panelled mahogany doors. Leaded windows with cylinder glass

Listed as a fine example of a C20 church by a notable architect. The church combines an elaborately and boldly massed neo-Byzantine exterior with an interior of considerable refinement and calm; the spaces which are given such strong expression externally are modulated with great subtlety within, these contrasts underscored by the transition from the external brickwork, to the smooth concrete of the interior. The latter appears to mark an experiment in the use of this material, creating highly expressive forms.