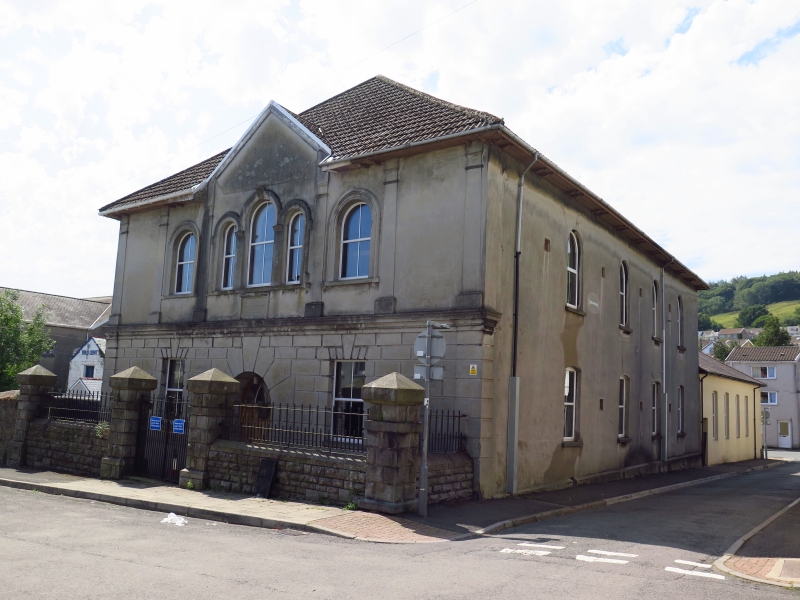 Location: Situated on the SW corner of Davis and Beddoe Street. Set behind low rubble wall with iron rails and stone piers.

Independent chapel of 1849, altered since. Cause began in 1846 using houses in the area which was
developing fast with the coal and iron industries (begun in the area in 1843). Present chapel built
1849-50 for £650, enlarged in 1856 and renewed in 1871 and 1890. A vestry was added at the back
before 1863, the year a hall was built onto that. The vestry was also used as a school, possibly the
first in the area. The interior appears to be all of a single date more probably 1890 rather than 1871, of remarkable quality. There never was an organ in the rear recess, despite the intention.

Classical chapel of 1849, altered. Stucco with hipped roof, C20 tiles, and paired brackets to eaves. Broad
3-bay, 2-storey facade on narrower end with gabled centre. Moulded string course between floors, upper
floor with six pilasters, flanking broad centre bay with arched triplet window, then arched side windows, then blank outer bays. Plain plinths, caps below the eaves, except the middle two which extend higher into the edge of the centre gable (gable detail has been removed). Windows are round-headed in moulded surrounds. Centre stepped triplet with centre keystone and pilasters between lights. Glazing with marginal glazing bars, centre light of triplet and outer windows have Y-tracery in head. Triplet sidelights are narrow with smaller panes. Side windows are slightly shorter and wider than centre light, and with no keystones.
Ground floor is rusticated over a plinth, with channelled pilasters at the outer angles. Windows are
square-headed with marginal glazing bars and stone sills with dressed faces. Voussoirs and keystones over. Large arched centre doorway with grained painted panelled double doors, and fanlight above with intersecting Gothick tracery. Side walls are rendered with four windows to each floor. Upper windows arched, lower windows camber-headed with similar glazing. Ventilation panels from former gas lighting are to the side of each window.

Unusually broad interior all apparently of the later C19, with fine quality joinery, mostly painted grained. Three-sided gallery on 4x1x4 cast-iron fluted columns with foliate heads. Gallery front projects on coved cornice and has panelled soffit. Fine grained timber front with long horizontal panels separated by piers, each pier with two narrow vertical panels. Dentilled top cornice broken forward over piers. Broad pulpit platform has stair either side with turned balusters and heavily bossed newels with finials. Balustrade also each side of pulpit which is stepped and canted out with dwarf balustrades to steps and panelling to canted sides and front. Dentilled top rail. Panelling behind platform across organ recess. Similar panelling to great seat, curved at corners, with thick moulded rail. Square moulded panels to front, similar vertical panels on the back. Pews are in three blocks with horizontal panels to backs and shaped bench ends with quatrefoils. Centre block is centrally divided, outer blocks are canted towards pulpit, but inward-facing pews flank pulpit. Raked gallery pews similar, some curved to follow the gallery shape. Walls to back and sides at both levels have wainscoting. Main chapel walls are rounded at angles. Rear half-glazed lobby doors with coloured and stained glass. Painted wooden ceiling all boarded to considerable complexity. Dentilled cornice curved at angles and stepped over centre gallery window, under deep horizontally boarded cove. Main ceiling in three panels, diagonally-slatted within borders with floral small bosses. Five fretwork circular vents, middle panel has one with quatrefoil around a circle, outer panels have two, each just the circle. Moulded thin ribs divide each panel, the centre a bordered rectangle, the outer two diagonally and horizontally crossed. Entrance lobby has patterned tiled floor with two large double wooden doors at either side to gallery staircase and half-glazed door to chapel. Stairways curve through ninety degrees to wide single wooden panelled door and remaining steps to gallery. Close-boarded wainscoting to either side of stairs.

Listed as a mid-C19 chapel foundation retaining an exceptionally fine interior of the later C19.