A Grade I Listed Building in Llanddeiniolen, Gwynedd 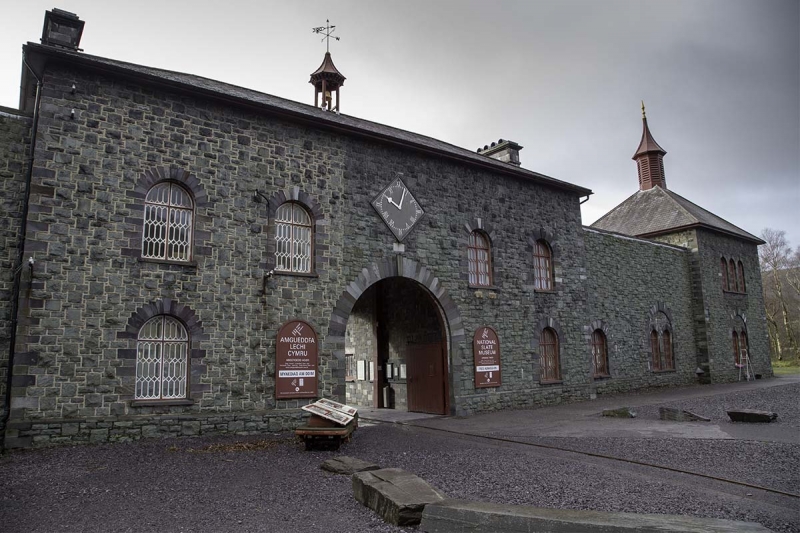 Location: Located at the south-east end of Llyn Padarn to the east of Llanberis, the quarry workshops sit at the foot of the vast workings of the former Dinorwic Slate Quarry; the immediately surrounding land i

The Dinorwic Quarry was first established in 1787, taking over existing workings in the area, the first incline being built in 1789. By the 1830s there was a tramway system on each terrace of the quarry, steam locomotives being introduced in the 1870s.The eventual scale of the quarry was such that its output of c100,000 tons p.a. in the late 1890s put in on a par with Penrhyn, representing almost a quarter of the total production of Welsh slate.The quarry finally closed in 1969. The complex of workshops was erected in 1870 to serve the Dinorwic quarry and includes saw-sheds, patternmaking shops, a foundry with cupola, a hand-operated crane dated 1872, blacksmiths' shops, fitting shops, stores, engine sheds, a canteen and chief engineer's house. From 1870 to 1925 all the machinery was powered by a De Winton water wheel (still in situ) 50' 5" (15.4m) in diameter, replaced in the latter year by a Pelton wheel, also still in existence. On closure of the quarry the workshop buildings were bought by Caernarvonshire County Council and taken into guardianship by the Department of the Environment: the buildings have since 1972 housed the Welsh Slate Museum.

Vast quadrangular plan around central courtyard, longer on east and west than on north and south. North (entrance) range contains, from east to west, the engine and carriage repair shed, chief engineer's house (now presented to the public in the form it had in c1911) and to the west of the entrance archway the clerk's office and stores. East range is divided into 4 areas and now comprises, from north to south, exhibition room, reconstructed mess room (caban) and further exhibition rooms. South range contains, from east to west, the maintenance workshop, sleeper grooving shed, vertical saw shed, engine shed, welding shed and iron and brass foundry with on first floor at eastern end (again from east to west) a store, pattern maker's workshop and pattern store. West range has, from south to north, a store, blacksmiths' shop, repair shop and fitting shop, latter including projection to west; approximately half-way down this range and projecting into the yard is the cropping machine shed. Short range at right-angles to western end of south range contains pattern store and links through to circular saw shed parallel with south range. Directly adjoining the saw shed is the massive rectangular structure housing the giant water wheel, access to the top of the wheel pit, formerly by means of a wooden staircase, now achieved via 1990s steel staircase or by lift.
Predominantly constructed of high-quality tightly jointed snecked slatestone, different appearance of eastern third of central entrance block to remainder apparently the result of repointing; tightly-jointed voussoirs to doorways and windows on north elevation, all other doors and windows, including to courtyard, with slatestone lintels and quoins; cropping machine shed is of slate slab construction. Slate roofs throughout, hipped to central entrance block and cropping machine shed, pyramidal to corner towers on north front, gable-ended to remainder.
Architecturally the buildings are of a dignified Classical form, plan and appearance; Gothick detailing is, however, used throughout for the cast-iron windows, purpose-made for the structure in the foundry: the character of the buildings is therefore both distinctive and unique. The external elevations are described first. North elevation is a symmetrical composition comprising 2-storey central entrance block flanked by high walls linking to square corner towers. Entrance block has central round-headed archway with boarded double doors filling lower section; diamond-shaped slate clock directly above; symmetrically-spaced round-arched windows, 2 on either side of archway to first floor and to outer bays only on ground floor; central timber cupola with bell and weathervane to ridge and tall integral end stacks with moulded capping at each end. Left linking wall has tall round-headed boarded door (to carriage repair shed) on left and round-arched window to right; right linking wall has identical window to left and 2 grouped together in round-arched recess on right. Both corner towers have octagonal louvres with spiked caps to their pyramidal roofs and 3 narrow round-arched windows on upper floor; round-headed boarded door (to engine shed) on ground floor of eastern tower and paired round-arched windows in round-headed recess to ground floor of western tower. West elevation has tall round-headed arch with cast-iron window to corner tower with to its right a twin-gabled projection (part of fitting shop); long range has smithy chimneys; 10 tall integral lateral ashlar stacks with capping and slate pots, that to left isolated, remainder regularly spaced; blind panels to wall and 2 lean-tos towards right end near junction with projecting gable of south range, which has wooden first-floor platform above 4ft (1.2192m) gauge railway track running alongside. East elevation has blind panels to long range, similar to those on west side. Wheel house is a tall rectangular structure with iron water tank on top and lower gabled building attached to its north side.
Internal (courtyard) elevations. North side: entrance block has symmetrical arrangement of 2 windows on each floor (presented as 3 floors on this side) to either side of central archway except for doorways to inner bays on ground floor, left protected by small gabled porch with adjoining lean-to, right boarded with narrow overlight; small 4-paned roundel above central archway. To the east of the entrance block is the gable end of the engine shed projecting into the courtyard with boarded door in right corner; low slate-slabbed structure with rooflights projects into courtyard on west side of engine shed. East range is single storey, comprising (from north) window, door, window, door, 3 windows, door, 4 windows, door, 2 windows, the doors all boarded and the windows cast-iron; slate ventilators near ridge towards southern end. South range of 2 storeys has on ground floor (from east) 3 boarded doors with narrow overlights, wider doorway (for engines) with integral windows and 3 further doors, the outer sliding, the central infilled. First floor has 7 evenly-spaced cast-iron windows; 4 large rooflights near ridge towards western end, which projects beyond west range; squat integral end stacks. West range is single storey with (from south, i.e. to left of the machine shed projection) a window, 2 doors, window, door, 4 windows, door; under the projection are 3 windows and then to its right a further door, 3 windows, a door and 2 windows; all the doors are boarded double doors and the windows cast-iron; 3 large rooflights in line with machine shed projection with slate ventilators near ridge immediately to their left. The machine shed projection is open to both sides at junction with west range and has further wide opening to right on its southern side; large rooflight in eastern roof slope. Low gable-ended slate-slabbed shed abuts south-eastern corner of machine shed with boarded door and small 4-paned window in its south gable end and large rooflight in eastern roof slope. The yard is crossed by several 4ft (1.2192m) gauge railway tracks (on which a variety of slate wagons are displayed) and a large steam-driven crane stands to the south of the cropping machine shed.

North range: inspection of engine and carriage repair sheds (belonging to Llanberis Lake Railway) not possible at time of Survey; chief engineer's house is presented to the public in the way it was fitted and furnished c1911 (until recently it was the museum shop and provided staff accommodation) and also contains museum offices. East range: largely devoted to museum displays and has reconstructed caban. South range: foundry is dominated by huge furnace, crane (1872) and jib; selection of patterns (made of yellow pine) on display; also a small brass founding furnace; staircase to pattern store and workshop. Sleeper grooving shed and vertical saw shed also with original equipment. West range: area now demonstrating slate splitting and dressing was once part of the blacksmiths' shed and later a welding shop. 4 hearths remain in the present blacksmiths' shop, all cast in the foundry, out of an original total of at least 12; racks of tongs, pincers and swages; forging hammer of c1900 and pneumatic hammer c1924; large grinding wheel at one end and strong, heavily-worn benches with vices attached run along the walls; double doors to cropping shed. Fitting shop retains original machinery, including 2 lathes installed c1900. Cropping machine shed projecting into yard has a combined punching and slotting machine, a cold saw and compressor, the latter not in situ and brought down from the quarry. To the south of the yard the saw shed adjoining the wheel house retains original equipment and fittings, including circular saw, saw table and pit. Wheel house itself contains the original huge iron water wheel, 15.4m (50' 5") in diameter, built by the De Winton Company, Caernarfon in 1870; at the foot of the staircase to this wheel is its replacement, the Pelton wheel installed in 1925 and still in use.

Listed at Grade I as a remarkable complex of repair and maintenance buildings associated with one of the most productive and important of the North Welsh slate quarries; a particularly complete ensemble in which fine industrial architecture and coherent plan clearly express the processes located within. The buildings are a fine monument to a major Welsh industry and represent a pinnacle of industrial architecture.