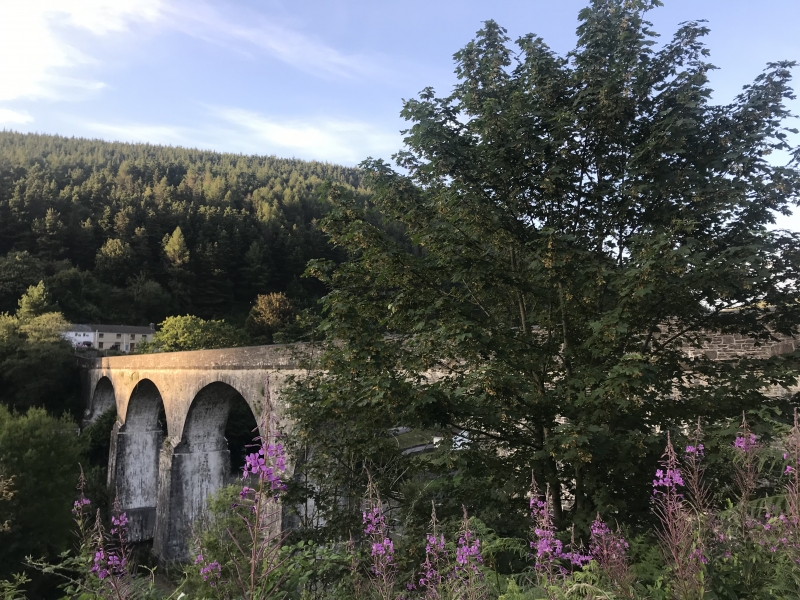 Built 1824-7 by the ironmaster John Reynolds to supply waterwheels at the Oakwood Ironworks. The ironworks was part of the expansion of the iron industry into the western part of the South Wales coalfield from the 1820s, but the considerable investment in outmoded water power, and the lack of knowledge it implies, was symptomatic of the early failure of the works. Little production is recorded for the furnaces, which were sold c1840 to the Governor & Company of Copper Miners. Thereafter the aqueduct appears no longer to have supplied water to the works. Small boats are also said to have used the aqueduct but after 1841 a railway was laid across the deck. The deck subsequently carried a minor road, which is now a public footpath closed to vehicles.

A large 4-bay aqueduct of rubble stone with tooled dressings. Elliptical arches are carried on wider tapering piers, the tops of which have stepped stone courses against the arch spandrels. The abutments have similar details to the piers. A continuous band is below the later parapet, which has blue-brick saddleback copings and is splayed out at the ends. The deck is laid with tarmac.

Listed grade II*, Bont Fawr Aqueduct is one of the few surviving structures related to the use of water power in the iron industry of the region and is among the finest surviving works of civil engineering in early C19 Wales.